CoverIntroduction for EducatorsTable of ContentsUpdates & Latest AdditionsLearning Pathway: Black Lives MatterLearning Pathway: Influential WomenLearning Pathway: Student RightsLearning Pathway: Election 2020Learning Pathway: Current Events Learning Pathway: Critical Media LiteracyTeacher-Designed Learning PlansTopic 1. The Philosophical Foundations of the United States Political System1.1. The Government of Ancient Athens1.2. The Government of the Roman Republic1.3. Enlightenment Thinkers and Democratic Government1.4. British Influences on American Government1.5. Native American Influences on U.S. GovernmentTopic 2. The Development of the United States Government2.1. The Revolutionary Era and the Declaration of Independence2.2. The Articles of Confederation2.3. The Constitutional Convention2.4. Debates between Federalists and Anti-Federalists2.5. Articles of the Constitution and the Bill of RightsTopic 3. Institutions of United States Government3.1. Branches of the Government and the Separation of Powers3.2. Examine the Relationship of the Three Branches3.3. The Roles of the Congress, the President, and the Courts3.4. Elections and Nominations3.5. The Role of Political PartiesTopic 4. The Rights and Responsibilities of Citizens4.1. Becoming a Citizen4.2. Rights and Responsibilities of Citizens and Non-Citizens4.3. Civic, Political, and Private Life4.4. Fundamental Principles and Values of American Political and Civic Life4.5. Voting and Citizen Participation in the Political Process4.6. Election Information4.7. Leadership and the Qualities of Political Leaders4.8. Cooperation Between Individuals and Elected Leaders4.9. Public Service as a Career4.10. Liberty in Conflict with Equality or Authority4.11. Political Courage and Those Who Affirmed or Denied Democratic Ideals4.12. The Role of Political Protest4.13. Public and Private Interest Groups, PACs, and Labor UnionsTopic 5. The Constitution, Amendments, and Supreme Court Decisions5.1. The Necessary and Proper Clause5.2. Amendments to the Constitution5.3. Constitutional Issues Related to the Civil War, Federal Power, and Individual Civil Rights5.4. Civil Rights and Equal Protection for Race, Gender, and Disability5.5. Marbury v. Madison and the Principle of Judicial Review5.6. Significant Supreme Court DecisionsTopic 6. The Structure of Massachusetts State and Local Government6.1. Functions of State and National Government6.2. United States and Massachusetts Constitutions6.3. Enumerated and Implied Powers6.4. Core Documents: The Protection of Individual Rights6.5. 10th Amendment to the Constitution6.6. Additional Provisions of the Massachusetts Constitution6.7. Responsibilities of Federal, State and Local Government6.8. Leadership Structure of the Massachusetts Government6.9. Tax-Supported Facilities and Services6.10. Components of Local GovernmentTopic 7. Freedom of the Press and News/Media Literacy7.1. Freedom of the Press7.2. Competing Information in a Free Press7.3. Writing the News: Different Formats and Their Functions7.4. Digital News and Social Media7.5. Evaluating Print and Online Media7.6. Analyzing Editorials, Editorial Cartoons, or Op-Ed Commentaries
5.2

Amendments to the Constitution

Standard 5.2: Amendments to the Constitution

Explain the historical context and significance of changes in the Constitution, including key amendments. (Massachusetts Curriculum Framework for History and Social Studies) [8.T5.2]

FOCUS QUESTION: How has the Constitution Been Amended and What has Been the Impact of Those Amendments?

Article V of the Constitution deals with how to amend (change) the laws of the land.

The authors of the Constitution recognized that change would be needed from time to time so they established a rigorous amendment process. While the Constitution has been changed over time, it is not easy to do, nor has it happened often.

What amendment is most well-known and considered most important? A majority of Americans (77 percent) know the First Amendment and its protections of freedom of speech, religion, assembly, and the press; four in ten (41 percent) say it is the most important. One in four (27 percent) Republicans indicate the Second Amendment is most important (Moore, 2016,). A case can be made for the significance of the 19th Amendment, for as journalist Lynn Sherr observed, "In 1872, Susan B. Anthony was arrested for the crime of voting while female. In 1920, that "crime" became a right" (quoted in Matchin, 2020, p. B8). How you rate your knowledge of the amendments and which ones do you regard as most important and/or most historically impactful?

1. INVESTIGATE: Prohibition and the 18th and 21st Amendments

In 1919, the United States passed the 18th Amendment, prohibiting the manufacture, sale, and transportation of alcohol. It began a period in American history known as Prohibition.

The Prohibition era, noted historian Daniel Okrent (2011), is framed by a profound historical puzzle: “How did a freedom-loving people decide to give up a private right that had been freely exercised by millions upon millions since the first Europeans arrived in the New World?” (p. 3).

One answer is that the United States emerged from World War I with “deep seismic faults in its society,” giving rise to “clashes” between urban and traditional society that would reverberate through the decade and beyond. Exploring Prohibition is a way to “help students grasp the era’s great complexity and give them insights into different cultural attitudes that still exist in our society” (Gifford, 1996, p. 3).

Prohibition was repealed by the 21st Amendment in 1933. For a brief overview of the entire period, see Unintended Consequences by Michael Lerner from the Ken Burns Prohibition website.

Prohibition and its repeal was a much more complex era of American history than has been typically understood. The support for and against Prohibition was created by a mix of social, economic, and political factors surrounding the use of alcohol. Some considered alcohol as a threat to traditional values, while others considered it just another commodity.

Individuals and groups (known as Wets and Drys) on each side of the issue used the media of the day (radio, newspapers, music) to influence public policy. But what media messages would people have created if they had access to modern-day social media?

Online Resources for the Prohibition Era

2. UNCOVER: Alice Paul and the History of the Equal Rights Amendment (ERA) 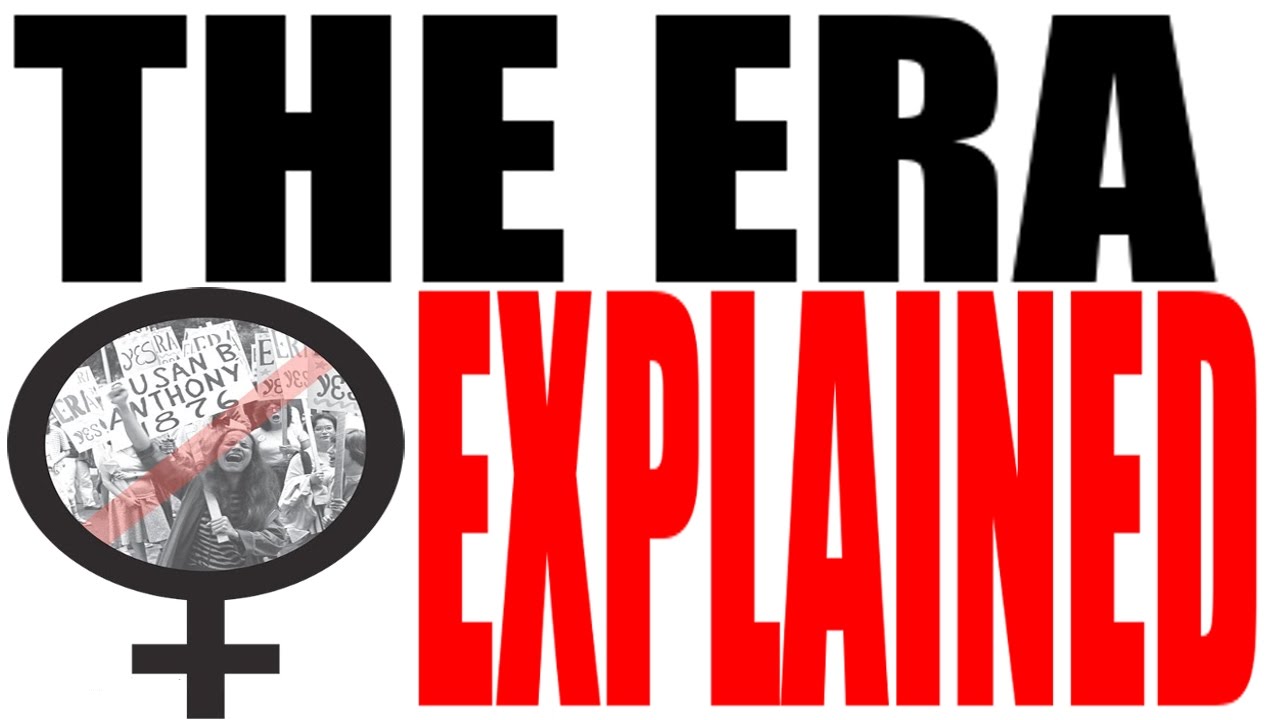 The ERA was widely opposed and remained so for 50 years until 1972 when it was passed by Congress and sent to the states for ratification. In the mid-1970s, First Lady Betty Ford was one of the amendment’s leading supporters.

The ERA needed to be ratified by 38 states within seven years in order to become a part of the Constitution. Conservative and Christian activists, notably Phyllis Schlafly led the movement opposing ratification of the ERA in the 1970s, claiming the amendment would lead to tax dollars being spent on abortion, civil rights for same sex couples, women being drafted into the military, and unisex bathrooms. The anti-ERA campaign was successful and the amendment was not passed by the 1982 deadline. Schlafly’s daughter Anne Schlafly Cori is an anti-ERA leader today.

In 2018, Illinois became the 37th state to ratify the amendment; Nevada having done so in 2017 (NPR, 2017). That left the ERA one state short of the three-quarters of the states total needed for passage of a constitutional amendment. Virginia then passed the ERA in early 2020.

What happens now? The original deadline for ratification has long passed, although the 27th Amendment was first proposed in 1789 and was not ratified until 1992. Congress would need to vote to void its earlier deadline in order to confirm the result. But in the meantime five states (Nebraska, Tennessee, Idaho, Kentucky, and South Dakota) that originally passed the ERA have attempted withdrawn their support. Are the votes of those states now null and void? The issue is likely to go the Supreme Court for resolution.

Media Literacy Connections: The Equal Rights Amendment on Twitter and other Social Media

The Equal Rights Amendment (ERA) continues to be a sharply contested constitutional topic. An Associated Press/NORC Center for Public Affairs Research poll in 2020 found that 3 in 4 Americans support the amendment, but that support has not translated into making the ERA part of the Constitution.

Meanwhile, proponents and opponents make extensive use of the media, particularly social media, to build support for their side of the issue.

In these activities, you will explore how the ERA is being discussed on social media and then you will design a social media campaign to convince politicians to vote for the passage of the ERA.

3. ENGAGE: What New Amendments to the Constitution Are Needed Today?

More than 40 constitutional amendments are introduced in Congress every year. They range across the political spectrum from overturning the Citizens United Supreme Court decision (from progressive and liberal groups) to repealing the 16th Amendment’s federal income tax (from conservative groups).

Amendments to balance the federal budget, implement campaign finance reform, punish flag desecration, and institute the direct election of the President have been the ones most often introduced since 1999. Hardly any of these proposed amendments get voted on, but the ideas of the amendments are added to the overall public dialogue about national and state policy (Desilver, 2018).

You can read what different scholars think about changes to the Constitution in a New Constitutional Amendments interactive from the New York Times (August 4, 2021).

Online Resources for Amendments to the Constitution

The amendment process has produced highly consequential changes to the United States Constitution. INVESTIGATE looked at the Prohibition Era that began with the 18th Amendment and ended with the 21st Amendment. UNCOVER explored the long history of the Equal Rights Amendment (ERA) that began with Alice Paul and continues to be supported and opposed today. ENGAGE asked students what new amendments to the Constitution do they think are needed today.