Analyze the Constitutional issues that caused the Civil War and led to the eventual expansion of the power of the federal government and individual civil rights. (Massachusetts Curriculum Framework for History and Social Studies) [8.T5.3]

FOCUS QUESTION: What is the Legacy of the Slavery and the Civil War Today?

Five generations have passed and the “Civil War is still with us,” declared historian James M. McPherson in 1988 (p. viii), and it remains with us today.

The Civil War happened in a country where the Constitution promised to “secure the blessings of liberty to ourselves and our posterity,” but these freedoms were available to only some of the population. The Civil War happened in the world’s largest slaveholding country at the time when 3.9 million of the nation’s 4.4 million black people were enslaved (Gates, 2014).

"The hard truth," wrote historian Andrew Delbanco (2018, pp.1, 2), "is that the United States was founded in an act of accommodation between two fundamentally different societies" - an industrializing North where slavery was fading or gone and an agricultural South where slavery was central to its and the nation's economy. Slavery, and the flights for freedom of fugitive slaves, "exposed the idea of the 'united' states as a lie."

Slavery was the fundamental cause of the Civil War. Northern Abolitionists sought to abolish slavery as an inhumane system at odds with the ideals of the Declaration of Independence and the Constitution. Other people in the North did not want new territories joining the union as slave states. People in the South sought to preserve slavery, both as an economic system and a way of life based on white supremacy and human bondage.

The Civil War cost the lives of more Americans than all the nation’s other wars combined and was followed by more than a century and a half of ongoing struggles by Black Americans to achieve civil rights and constitutional freedoms in American society.

The 2018 Massachusetts History and Social Science Curriculum Framework lists the following critical policies and events leading to the Civil War:

Teaching and learning materials for these topics are online at the resourcesforhistoryteachers Events Leading to the Civil War wiki page.

Today, the United States still struggles to secure freedom, liberty, and justice for all. In this standard we explore key events and constitutional issues that led to the coming of the Civil War to help understand why that war was fought and its unfinished legacy in American society today.

1. INVESTIGATE: The Missouri Compromise, the Dred Scott Case, and the 54th Volunteer Regiment During the Civil War

In 1819-1820, Missouri’s request to enter the union as a new state created a crisis which foreshadowed the nation’s emerging disputes over slavery. Many in the North opposed the admission of another slave state, particularly since it would upset the then equal balance of free states (NH, VT, MA, RI, CT, NY, NJ, PA, OH, IN, IL) and slave states (DE, MD, VA, KY, TN, NC, SC, GA, AL, MS, LA, AR).

A group of senators, Henry Clay of Kentucky, Daniel Webster of Massachusetts, and John C. Calhoun of South Carolina, authored the Missouri Compromise. The compromise balanced Missouri's admission to the Union as a slave state with the admission of much of Massachusetts' northern territory as a free state—what is now the state of Maine.

The southern border of Missouri (the parallel 36°30′ north, 36.5 degrees north latitude) became a demarcation line for the status of slavery in new states—states admitted to the south would be slave states while states to the north would be free states. No new territory north of the line (except the proposed borders of Missouri itself) would permit slavery.

Known as the “Great Compromiser,” Henry Clay served in Congress for nearly 40 years, in both the House and the Senate, and was Secretary of State under President John Quincy Adams. He was a contender for the Presidency five times, running three times in 1824, 1832, and 1844. Learn more about Henry Clay by viewing a restoration of a famous painting entitled Henry Clay in the United States Senate.

Online Resources for the Missouri Compromise

In 1847, having lived in the free state of Illinois and the free territory of Wisconsin, Dred Scott, a Black man, sued in court for the freedom of his wife and daughters who still resided in Missouri, a slave state. The case went to the Supreme Court where in 1857 Chief Justice Roger B. Taney, a supporter of slavery, wrote in the majority opinion that Negroes “had no rights which the white man was bound to respect; and that the negro might justly and lawfully be reduced to slavery for his benefit. He was bought and sold and treated as an ordinary article of merchandise and traffic, whenever profit could be made by it” (quoted in The Dred Scott Decision, Digital History, 2019, para. 7).

In summary Taney opined, the phrase “all men are created equal” clearly did not, and could not, apply to the people held in slavery. They could not become citizens. The Court further said the Missouri Compromise was unconstitutional on the grounds that the federal government had no power to regulate slavery.

Supreme Court Justice Benjamin Robbins Curtis who began his law career in Northfield, Massachusetts, wrote a famous dissent in the Dred Scott Case, stating it was "not true, in point of fact, that the Constitution was made exclusively by the white race." Blacks were "in every sense part of the people of the United States [as] they were among those for whom and whose posterity the Constitution was ordained and established" (quoted in “Franklin County's U.S. Supreme Court Justice," The Recorder, May 3, 2013, p. 6). There is more on Curtis' decision at the website Famous Dissents.

The 54th Volunteer Regiment During the Civil War

In 1863, some 80 years after abolishing slavery, Massachusetts was the first state to recruit black soldiers to fight for the Union in the Civil War with the formation of the Massachusetts Volunteer 54th Regiment.

The story of black soldiers is an important milestone in the struggle for civil rights.

Nearly 180,000 free black men and escaped slaves served in the Union Army during the Civil War. But at first they were denied the right to fight by a prejudiced public and a reluctant government. Even after they eventually entered the Union ranks, black soldiers continued to struggle for equal treatment. Placed in racially segregated infantry, artillery, and cavalry regiments, these troops were almost always led by white officers. (Constitutional Rights Foundation, 2020, para. 1)

Black troops fought in 449 battles, one-third of all black soldiers died, and a dozen were awarded Congressional Medals of Honor. In addition to heroism in battle (the 54th Massachusetts suffered 40% casualties in the Battle of Fort Wagner in Charleston Harbor), this unit refused pay as a protest against federal government policies that paid White soldiers more than Black soldiers.

Primary Source Learning Activity: We Are Here to Honor Liberty and To Denounce Slavery

We Are Here to Honor Liberty and to Denounce Slavery is free, interactive middle and high school curriculum developed by the David Ruggles Center for History & Education in Florence, Massachusetts. It consists of 11 primary source packets with guiding questions focusing on one utopian community and its involvement in the abolitionist movement and the struggle to end slavery in the years before the Civil War.

"The Underground Railroad was a system of safe houses and hiding places that helped fugitive slaves escape to freedom in Canada, Mexico, and elsewhere outside of the United States" (Ohio History Central, para. 1).

Its path to freedom was long and dangerous. Some 100,000 slaves gained freedom, however, that was only a small percentage of the more than 4 million enslaved black people in the South.

Harriet Tubman was an escaped slave who became a “conductor” on the Underground Railroad, risking her life many times to help slaves gain freedom. Of her efforts, she said, “I can say what most conductors can’t say. I never ran my train off the track and I never lost a passenger” (quoted in Library of Congress, nd).

You can learn more about Harriet Tubman on the resourcesforhistory teachers wiki page Women of the Abolitionist Movement.

Online Resources for Harriet Tubman and the Underground Railroad

3. Engage:  Whose Faces Should Be on U.S. Currency?

In 2016, the Treasury Department announced plans to redesign the $5, $10, and $20 dollar bills to honor historical figures involved in women’s suffrage and movement for civil rights. Five Presidents and two founding fathers are currently displayed on paper bills.

The focus for the $5 was to be on individuals who were part of seminal events that occurred at the Lincoln Memorial including singer Marian Anderson and Dr. Martin Luther King, Jr.

Harriet Tubman was to be the first new image appearing on the $20 dollar bill, but that plan has been delayed to 2028 by the Secretary of the Treasury in 2019. The Treasury Secretary does have the authority to decide whose face can appear on every U.S. bill. 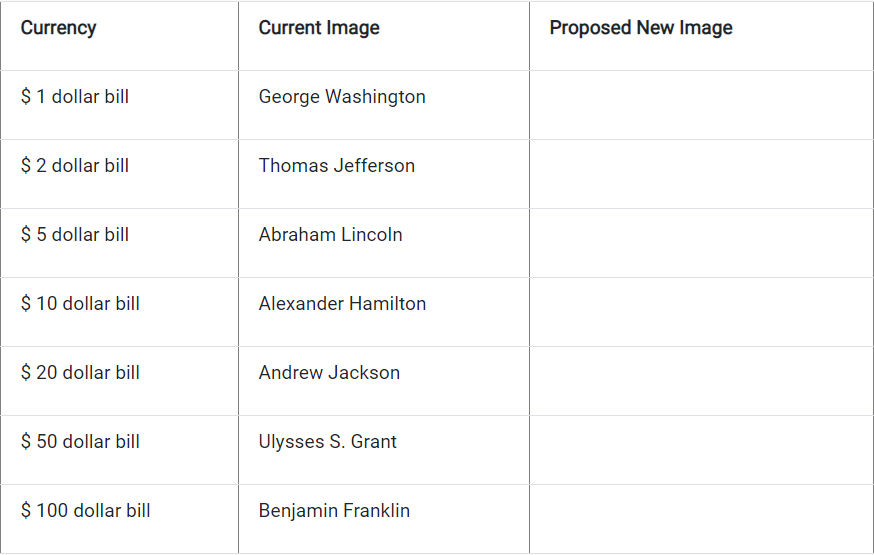 The Civil War is at the center of the constitutional history of the United States. Before the war, the institution of slavery was a glaring contradiction in American government and society. How could there be slavery in the country founded on the principle that all men are free? After the war, black Americans have struggled for equal rights for more than 150 years and continue to do so today. INVESTIGATE looked at three topics that shaped the Civil War era. UNCOVER told the story of Harriet Tubman and the Underground Railroad. ENGAGE asked that given the Civil War and African American struggles for freedom, whose faces should appear on United States currency.