Freedom of the Press

Standard 7.1: Freedom of the Press

Explain why freedom of the press was included as a right in the First Amendment to the United States Constitution and in Article 16 of the Massachusetts Constitution; explain that freedom of the press means the right to express and publish views on politics and other topics without government sponsorship, oversight, control or censorship. (Massachusetts Curriculum Framework for History and Social Studies) [8.T7.1]

FOCUS QUESTION: What is the History of Freedom of the Press in the United States?

Freedom of the press is set forth in the First Amendment to the United States Constitution:

“Congress shall make no law respecting an establishment of religion, or prohibiting the free exercise thereof; or abridging the freedom of speech, or of the press; or the right of the people peaceably to assemble, and to petition the Government for a redress of grievances” (Amendment 1: U.S. Constitution (Freedom of Religion, Speech, Press, Assembly and Petition).

Freedom of the Press is a bedrock principle of our democratic system of government. It establishes that news reporters and news organizations must be free and unrestrained in their efforts to report events and uncover the truth. As young adult author, Linda Barrett Osborne (2020, p.1) noted of the First Amendment's protection of freedom of the press, "for more than 220 years, it has guaranteed that the federal government cannot stop news media from publishing news, ideas, and opinions, even those that disagree with the actions of presidents and lawmakers."

By contrast, totalitarian and authoritarian governments seek to control the press by dictating what can be told or shown to the people. Freedom House, a press watchdog organization, has reported that only 13% of the world’s population experiences a free press (Press Freedom’s Dark Horizon, 2017).

A free press does not mean that everyone in the media reports the same events in the same way. Rather a free press allows competing ideas and conflicting viewpoints to be freely expressed without censorship so people can make up their own minds based on what they see, hear, and read.  The press, through print and online media, provide information in different formats beyond what is considered "objective journalism," including political analysis, editorials, editorial cartoons, and Op-Ed commentaries. Readers and viewers, especially students, need to learn and practice the skills of media literacy so they can critically evaluate the information they encounter in all forms of news media.

Landmark freedom of the press court cases include:

The Peter Zenger Trial of 1735

In 1734, William Cosby, the colonial governor of New York brought a libel suit against John Peter Zenger, a printer and journalist for the New York Weekly Journal newspaper. The paper had been highly critical of the governor in print.

However, Zenger had not written the critical material, only printed it since he was one of the few individuals with the skills to operate the printing press. At trial, Zenger was found not guilty. Although the case set no formal legal precedents, it impacted public opinion and set the stage for protections written into the Constitution and the Bill of Rights.

The defendant, Jay Near, published “The Saturday Press,” a controversial and prejudicial newspaper intended to expose corruption in government. The paper criticized and offended many important people. In 1925, he was stopped from publishing the paper and convicted in court under a Minnesota Public Nuisance Law that banned the distribution of “malicious, scandalous and defamatory” materials. Central to the case was the idea of “prior restraint,” meaning the government can prevent in advance the publishing of material it considers objectionable.

The Supreme Court overturned Near's conviction, thereby establishing "a constitutional principle the doctrine that, with some narrow exceptions, the government could not censor or otherwise prohibit a publication in advance, even though the communication might be punishable after publication in a criminal or other proceeding"  (Near v. Minnesota).

In 1960, L. B. Sullivan, one of the leaders of the Montgomery, Alabama police force, sued the New York Times for libel (printing knowingly false and harmful information). The paper had run an advertisement from civil rights groups that included charges about police activities, some of which were exaggerated and therefore not true. Sullivan sought financial compensation for damages to his reputation.

The Supreme Court declared that the First Amendment protects the publication of statements in newspapers, even false ones, about the conduct of public officials except when the statements can be proved to have been made with “actual malice.” In extending the protection of freedom of the press, the Court said, “debate on public issues should be uninhibited, robust, and wide-open” and that was more important than occasional factual errors that may appear in print.

A former war analyst and whistleblower Daniel Ellsberg had leaked the information to the press. The Supreme Court ruled against the Nixon Administration’s efforts to prohibit the publication of the Pentagon Papers citing the Near v. Minnesota case as precedent. 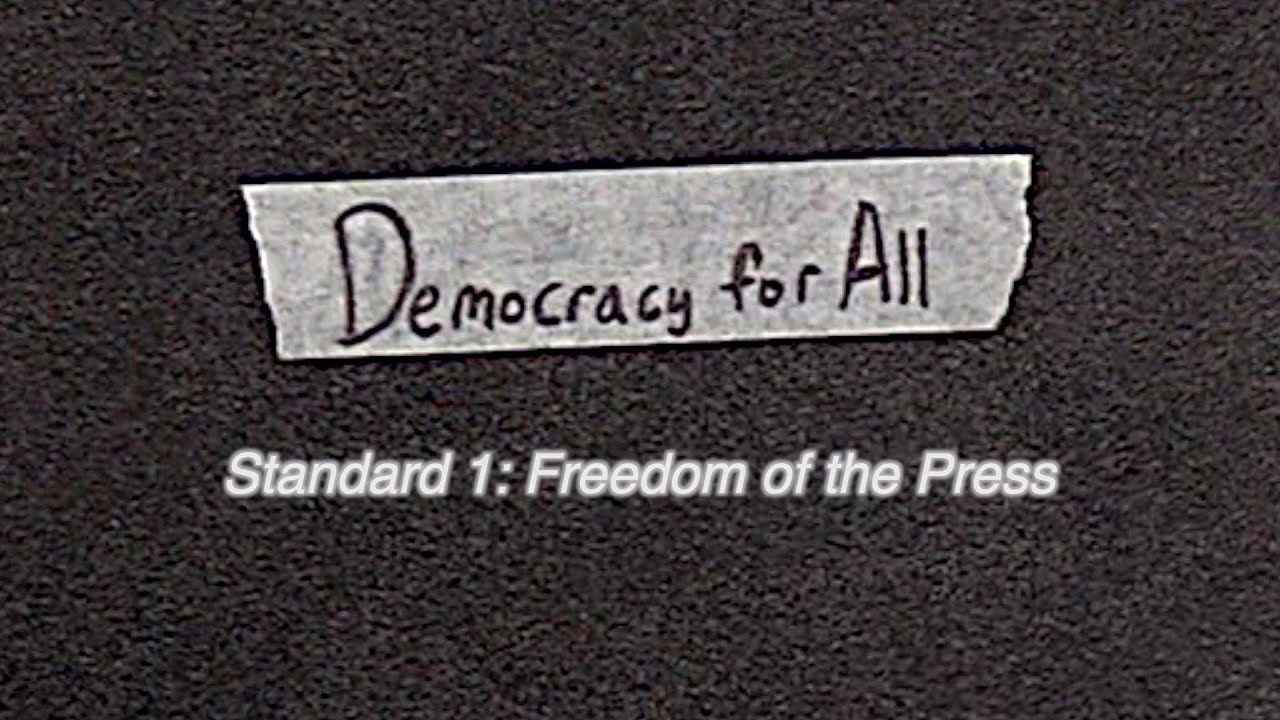 Focus Question: How is freedom of the press restricted today?

Activity: Freedom of the Press

Online Resources for Notable Freedom of the Press Court Cases

2. UNCOVER: Censorship and the Campaign Against Comic Books in the 1950s; Book Banning in the U.S. Today; and the Great Chinese Firewall

Censorship involves the “suppression of words, images or ideas” that are deemed “offensive.”  It happens “whenever some people succeed in imposing their personal or moral values on others” (American Civil Liberties Union, 2019).  Despite the First Amendment’s guarantee of freedom of expression, censorship has a long history in this country and others—and it continues today. The Campaign Against Comic Books in the 1950s and current efforts to Ban Books in the United States along with the implementation of the Great Chinese Firewall reveal the threats censorship poses to a free press and peoples' freedoms.

1. The Campaign Against Comic Books in the 1950s

The first modern comic book, Famous Funnies, was published in 1933. Superman appeared in 1938, followed in 1941 by Batman, Wonder Woman, and Captain America, collectively launching a “Golden Age” of comics that lasted into the mid-1950s.  It is estimated that 90% of boys and girls in the United States were reading comic books during the 1940s.

Yet, despite their popularity and readership, comic books were subject to intense opposition.  There were comic book burnings and calls for greater comic book censorship appeared widely in the 1950s following the publication of Frederic Wertham’s book, Seduction of the Innocent: The Influence of Comic Books on Today’s Youth (1954) that held that comics cause young people to commit violent acts. Hearings by the U.S. Senate’s Judiciary Committee’s Subcommittee to Investigate Juvenile Delinquency put comics and the boundaries of free speech on trial.

Examining the comic book hearings, the Comic Book Code of 1954, and ongoing efforts to ban books offers an opportunity to explore how freedom of the press can be threatened by political censorship and media pressure.

Online Resources for The Campaign Against Comic Books

Politically active groups in the United States continue to try to ban or censor books they find objectionable in theme and content. Some of the most-challenged books are: Harry Potter; To Kill a Mockingbird; The Adventures of Huckleberry Finn; Goosebumps; I Know Why The Caged Bird Sings; and Of Mice and Men.  Here is a list of some 250 books that have been challenged between 2002 and 2018.

To counteract these efforts at suppression, every year the American Library Association celebrates Banned and Challenged Books Week during the last week in September to encourage everyone to read what others seek to prevent you from reading.

The Great Chinese Firewall is the term given to efforts by the government of the People’s Republic of China to regulate and control what information its citizens can access online.  A firewall is a security system that blocks online material from coming to computers.  Firewalls can block hackers, spammers, and cybercriminals from infecting individual or organizational computers, but governments can also use them to block (or censor) access to legitimate websites.

To see how extensive the firewall system is in China, consider the following question, "Which of the following websites do you think people in China can access?

According to Amnesty International, the only website people in China can view is China's Olympic Committee website. The rest are blocked, along with Facebook, Twitter, Snapchat and many independent news sites (The Great Firewall of China).

CNN reporter and author James Griffiths (2019) has called China’s firewall system the “most sophisticated in the world for controlling, filtering, and surveilling the internet” (The Great Firewall of China: How to Build and Control an Alternate Version of the Internet, 2019). While people in China can secretly access forbidden sites using a VPN service, the government is able to tightly control what content makes its way to smartphones, computers, and other devices in China.

The Great Chinese Firewall raises questions of how much a government (or for that matter any organization) should be allowed to control people’s open access to information. Around the world, many governments restrict the flow of information to its citizens.

3. ENGAGE: What are The Speech Rights of Student Journalists?

In 1983, a teacher and the principal at Hazelwood East High School in St. Louis County, Missouri refused to allow students to publish two articles they deemed offensive in the school-sponsored student newspaper. The articles dealt with divorce and teen pregnancy. The student journalists sued, claiming that the adults’ censorship violated their First Amendment rights of free speech.

In the landmark case, Hazelwood School District v. Kuhlmeier (1988), the Supreme Court disagreed with the students, ruling that a school newspaper was not a “forum for public expression.” This ruling established that student journalists do not have the same speech and press protections as adult journalists in community settings.

In 2016, the state of Illinois expanded the press and speech rights of students with the passage the The Speech Rights of Student Journalists Act. California and Massachusetts have also passed legislation forbidding censorship of school newspapers unless the censored material would disrupt the functioning of the school.

Online Resources for the Rights of Student Journalists

To learn about the history of freedom of the press, INVESTIGATE examined notable court cases where the rights of journalists were challenged by efforts to suppress what people could read in newspapers and other publication formats. ENGAGE looked at the rights of middle and high school student journalists. UNCOVER focused on three occasions of censorship: 1) the campaign against comic books and the enactment of the Comic Code of 1954; 2) current efforts by groups to ban books in the United States; and 3) the Great Chinese Firewall that restricts Internet access to some 800 million Chinese citizens and represents one of the greatest global threats to free expression in a digital age.