CoverUnit 1. About this bookFour reasons not to require students to be on webcam all the timeQuick resources about pedagogy and technology that may be helpful to shareForewordAcknowledgementsUnit 2. Examples of whole-class activitiesCreating a mindful learning environment using Adobe ConnectCreating community agreements collaboratively with online students: Reasons, anti-racist considerations, and logistics in Adobe ConnectThe use of a large chat pod to encourage chat participation about particular questionsUsing large slides and a smaller chat pod to focus attention on mini-lecture contentCreating opportunities for student voice in online classes by using polls for feedbackUsing polls to guide class check-in timeUsing a poll and a second chat pod to wrap up the class sessionAdobe Connect status icons: A useful feature to increase engagement Bringing all students onto webcam together for special circumstances: Using a large video podUsing PowerPoint portrait-oriented slides to maximize content sharingGroup presentations in Adobe Connect: Using an extra wide video pod and dedicated second chat pod for Q&ALive drawing using a second webcamUsing a large webcam pod and large chat in a panel view layout: How to create a custom virtual stage for successful guest speaker presentationsDedicated chat pods for simulated client role play video exercise in an online skills-based lab“Good point. I agree.”: Challenging students to create “thoughtful contributions” in classA Moment of Action: Opening an inclusive, engaged, and trauma-informed classroomIn-class breaks: The importance of taking a break during online classes and considerations for break activitiesCommunity-building in Adobe Connect: Using layouts and different pods to facilitate games and icebreaker activities Building online class community through photos and storytelling“Student Spotlight” Activity: Cultivating an Empathetic Online CommunityUsing emojis in Adobe Connect to encourage student engagement AHA moments: Connecting online course content to field educationUsing layouts to facilitate guided mindfulness, meditation, and yoga in Adobe Connect classroomsMindfulness and the engaged online classroomChair yoga in the online classroom Using PhotoVoice as a teaching tool in the Adobe Connect classroomUsing a creative award presentation to review semester content and leave a lasting impactCreating a virtual quilt: A final class activity/toolUnit 3. Examples of small-group breakout activities and debriefsEnriching classroom discussions with breakout roomsEnhancing student engagement in the 10-minute breakout activity: Pre-assigning groups and rolesShowing note pods from breakout groups in one layout to debrief or monitor progress of a breakout conversation: Using a birds eye view setupKWL charts: How to implement this teaching technique in the Adobe Connect online classroom Breakout exercise for collective syllabus annotation in Adobe ConnectConcept mapping: Bringing Universal Design for Learning to the Adobe Connect classroomAn example of using the whiteboard for small breakout groups in Adobe Connect: “Draw Poverty”Scripted role play in Adobe Connect: Practicing clinical skills in an online classroomDimensions of self care: Exploring clinical issues for social workers in an online classroomThe use of polls to facilitate post-role play exercise debriefing discussions in an online skills labEnding a course with gratitude: A unique and memorable activity acknowledging student contributions to the class communityAppendixAuthor biosAdditional resources about online education from our authors
Designing Engaging and Interactive Synchronous Online Class Sessions

Showing note pods from breakout groups in one layout to debrief or monitor progress of a breakout conversation: Using a birds eye view setup

After a breakout group activity, instructors may want to have students debrief their conversations. Providing a view of the note pods each group used in their breakout room can facilitate this discussion. I refer to this layout as a “birds eye view” because it allows you to take in information from each breakout room at a glance. Instructors can also use this layout to monitor the progress groups are making during the breakout activity. This chapter demonstrates an example of what this layout might look like.

My goals for using a birds eye view layout, a layout that simultaneously shows note pods from each group’s breakout room, are to:

A birds eye view layout has become a standard part of my classroom setup whenever a breakout session is planned. This layout allows me and other members of the instructional team to monitor the progress each group is making during the activity. I can often identify if a group is stuck or if there is confusion about the activity by monitoring what is being recorded on the note pods. This allows me to pop into a breakout room and offer assistance in real time during the activity, or broadcast a message to all rooms to clarify an instruction or add more time to the activity.

During the debrief, this layout allows students to see how many small groups there were, and the groups’ notes provide a snapshot of the discussion or work that each group produced. Students can identify common points of discussion across different groups and adjust their report-backs to amplify these points or note unique contributions from their group’s discussion. Providing access to the same note pods that were used in the breakout rooms also supports students who are sharing out to the class and can reduce anxiety about volunteering to speak on behalf of their group.

Step 1: Create the birds eye view layout in the Adobe Connect classroom before the class session.

The birds eye view layout should include the attendees pod, video pod, chat pod, and the note pods from each breakout room (Image 1 and Image 2). An elongated video pod across the top of this layout can allow space for multiple presenters, or multiple students from each group, to appear on camera without sacrificing visibility. The chat pod can be wide along the bottom of the layout or narrow and tall along one side based on your preference.

Breakout sessions and debriefs can run longer than planned. To manage this, when asking students to report out about their breakout group’s discussion, it can help to set expectations by asking each group to limit their report back to a few minutes. As a visual support, I often like to include a small share pod with a countdown timer to allow students to monitor how much time they have to speak. I usually will position the timer: (1) in the lower left corner, under the attendees pod, (2) on the left above the attendees pod but below the video pod, or (3) in the lower right corner of the layout.

Step 3: Expand note pods as students from that breakout room share out, if needed for readability.

Based on the number of breakout groups, you may need to fit many note pods into your birds eye view layout (Image 2). This might make it difficult to read what is written on each note pod, particularly if there is a lot of text and it is necessary to scroll. In this case, I enlarge the note pod while students from that group are sharing out (Image 3). I resize the note pod when that group is finished so that all note pods are visible again.

Image 1: Example Adobe Connect layout with note pods from three breakout rooms organized under an elongated video pod spread across the top of the layout to allow space for multiple presenters. Adobe product screenshot(s) reprinted with permission from Adobe.

Image 1 Alt-Text: This is a screenshot of an Adobe Connect classroom layout designed to show note pods from three breakout group rooms in one bird’s eye view layout. This layout facilitates conversation while debriefing a breakout activity. An elongated video pod is spread across the top of the layout and shows a single webcam of the author. On the far left side, there is a narrow attendees pod. Next, there are three note pods, one from each breakout room. The note pods all have the following text: “Present (Who’s in the room): Facilitator (Help guide the discussion): Reporter (Report back to the class): Recorder (Take notes during breakout): Notes:” A chat pod is stretched along the bottom of the layout under the note pods. In the bottom left corner, there is a small Stage Lights countdown timer for presenters to monitor how much time they have left to speak. 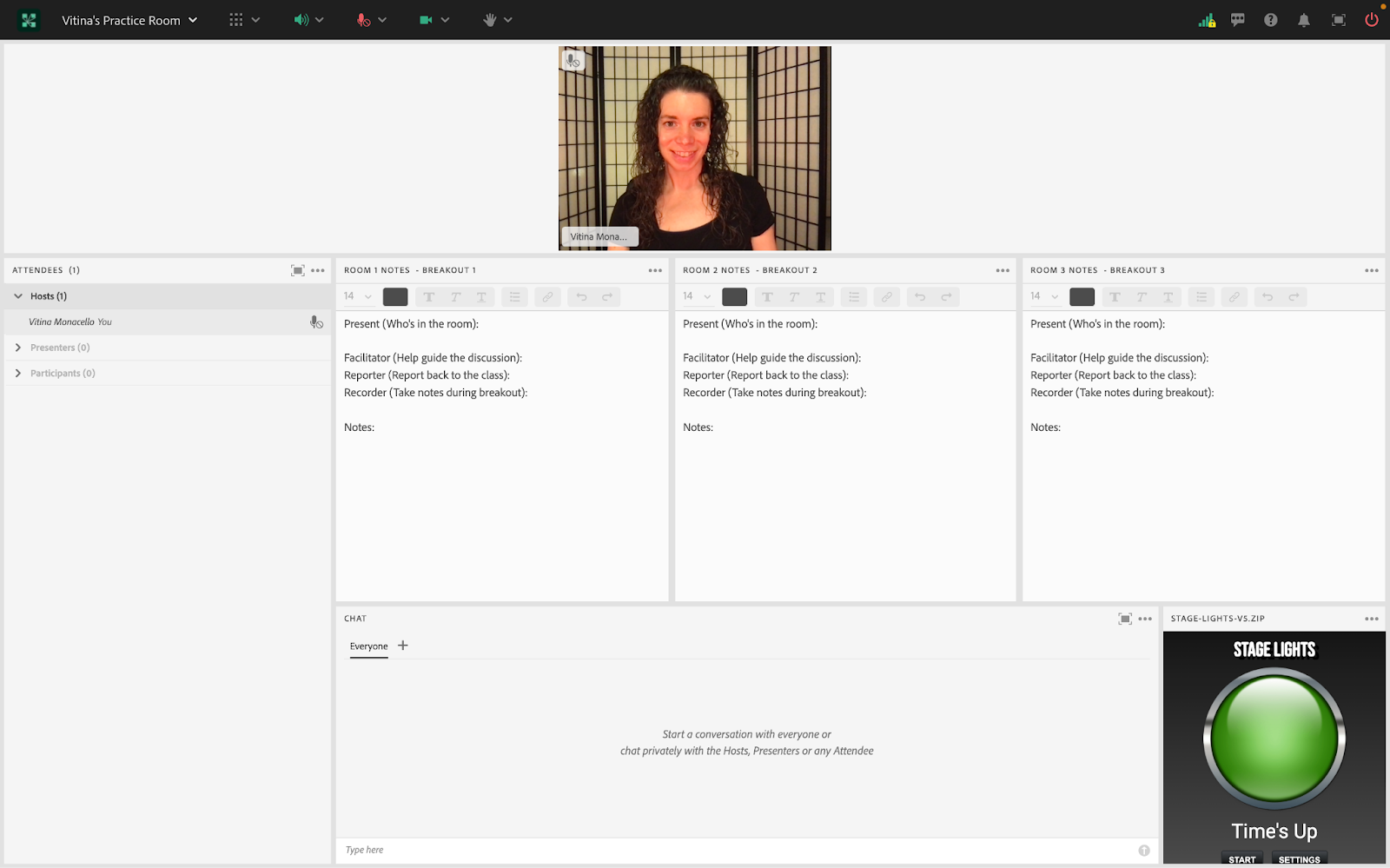 Image 2: Example Adobe Connect layout with more space for note pods when many breakout rooms are utilized. Note pods are organized under an elongated video pod spread across the top of the layout to allow space for multiple presenters. The chat pod stretches vertically along the right side of the screen to create more space for note pods from each breakout room. Adobe product screenshot(s) reprinted with permission from Adobe.

Image 2 Alt-Text: Like Image 1, this is a screenshot of an Adobe Connect classroom layout designed to show note pods from breakout group rooms in one bird’s eye view layout to facilitate conversation while debriefing a breakout activity. The difference is that this layout shows an alternative setup with more space for note pods when many breakout rooms are utilized. An elongated video pod is spread across the top of the layout and shows a single webcam of the author. In the bottom left corner, there is a narrow attendees pod. Above the attendees pod is a small countdown timer for presenters to monitor how much time they have left to speak. In the middle of the layout, under the video pod, are eight note pods, one from each breakout room. The note pods have the same text as the note pods in Image 1. A chat pod is stretched vertically along the right side of the layout, under the video pod. 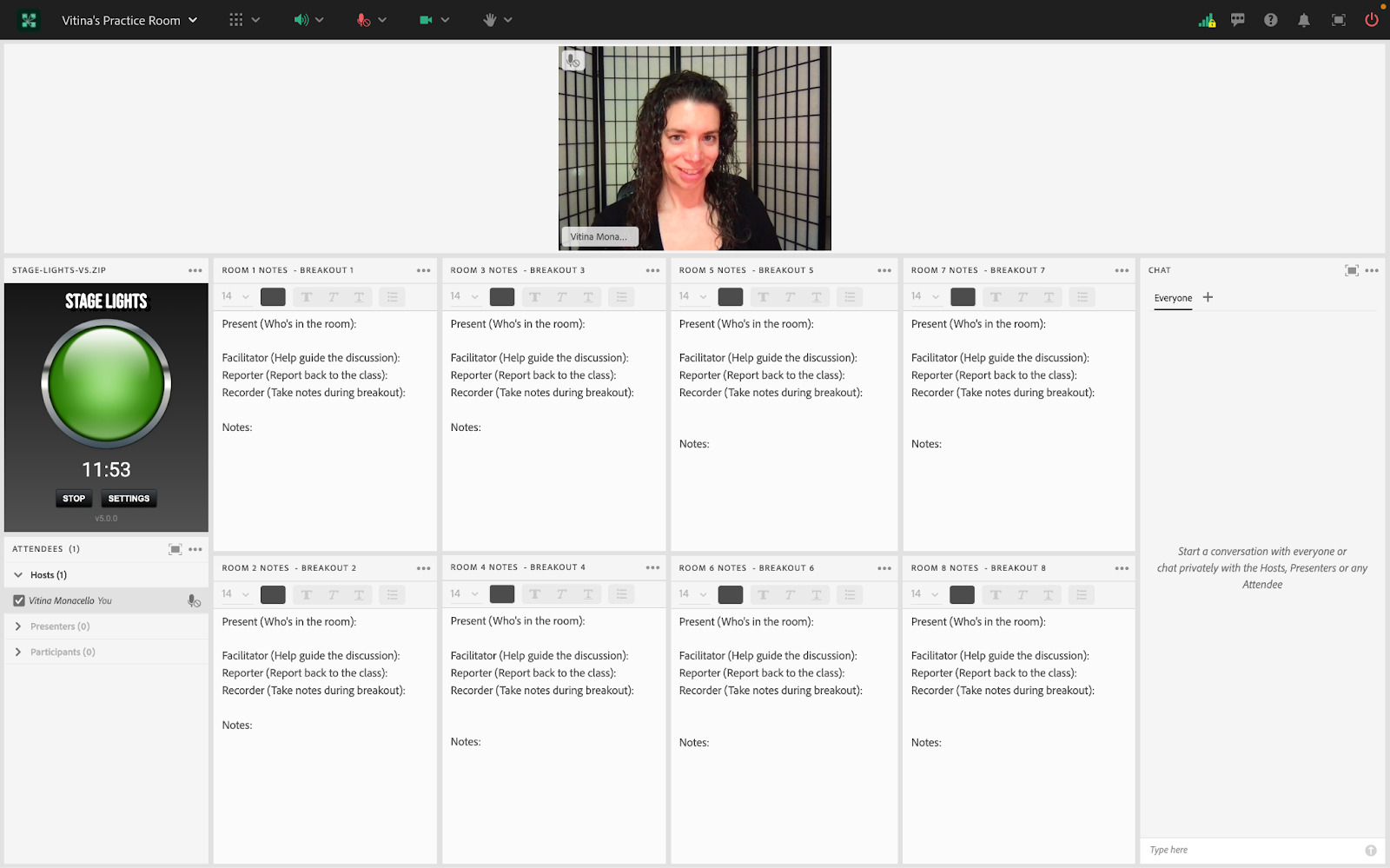 Image 3: When many note pods are fit into the layout, it is often helpful to expand the note pod of the group that is reporting out to make it easier to read. Adobe product screenshot(s) reprinted with permission from Adobe.

Image 3 Alt-Text: This is a screenshot of the same Adobe Connect classroom layout as in Image 2. The difference is that the note pod to the left of the timer has been temporarily expanded to cover three other note pods, to make the note pod easier to read as that group presents. Four note pods to the right of the expanded note pod are still visible. 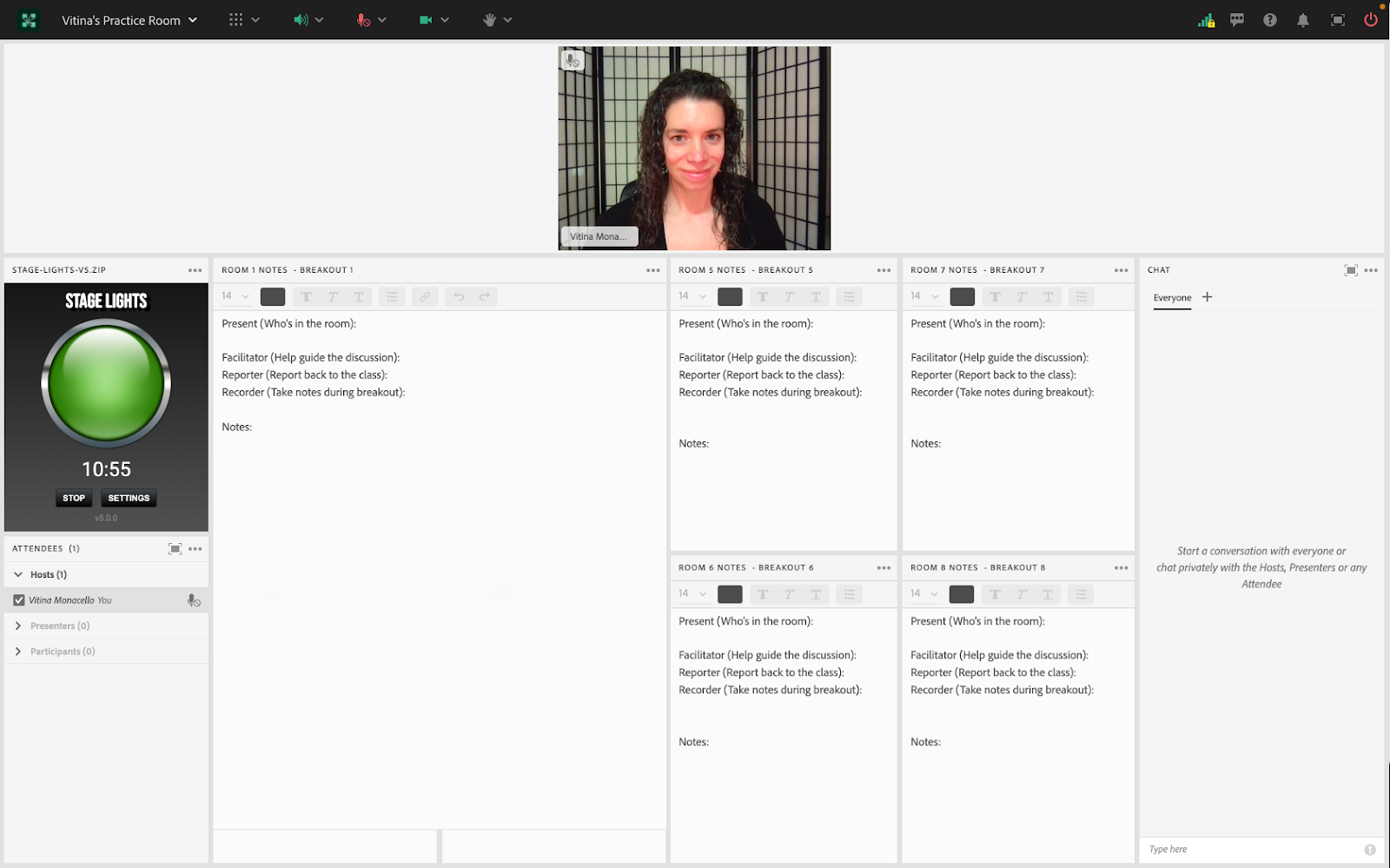 Vitina Monacello, MSW, works as a live support specialist for Columbia University’s School of Social Work (CSSW) online program. Live support specialists enhance the synchronous online classroom experience and use social work skills while providing technical support to the instructional team and students. She also works as a therapist at Pace Center for Girls in Immokalee, Florida. Pace is a non-profit organization that provides academic classes, counseling, and social services to middle school and high school girls in a trauma-informed and gender-responsive environment. Ms. Monacello received a Masters of Social Work from Columbia University and a Bachelors of Arts in Human Rights and Economics from the University of Dayton. She is passionate about human rights, education, and health equity.