CoverUnit 1. About this bookFour reasons not to require students to be on webcam all the timeQuick resources about pedagogy and technology that may be helpful to shareForewordAcknowledgementsUnit 2. Examples of whole-class activitiesCreating a mindful learning environment using Adobe ConnectCreating community agreements collaboratively with online students: Reasons, anti-racist considerations, and logistics in Adobe ConnectThe use of a large chat pod to encourage chat participation about particular questionsUsing large slides and a smaller chat pod to focus attention on mini-lecture contentCreating opportunities for student voice in online classes by using polls for feedbackUsing polls to guide class check-in timeUsing a poll and a second chat pod to wrap up the class sessionAdobe Connect status icons: A useful feature to increase engagement Bringing all students onto webcam together for special circumstances: Using a large video podUsing PowerPoint portrait-oriented slides to maximize content sharingGroup presentations in Adobe Connect: Using an extra wide video pod and dedicated second chat pod for Q&ALive drawing using a second webcamUsing a large webcam pod and large chat in a panel view layout: How to create a custom virtual stage for successful guest speaker presentationsDedicated chat pods for simulated client role play video exercise in an online skills-based lab“Good point. I agree.”: Challenging students to create “thoughtful contributions” in classA Moment of Action: Opening an inclusive, engaged, and trauma-informed classroomIn-class breaks: The importance of taking a break during online classes and considerations for break activitiesCommunity-building in Adobe Connect: Using layouts and different pods to facilitate games and icebreaker activities Building online class community through photos and storytelling“Student Spotlight” Activity: Cultivating an Empathetic Online CommunityUsing emojis in Adobe Connect to encourage student engagement AHA moments: Connecting online course content to field educationUsing layouts to facilitate guided mindfulness, meditation, and yoga in Adobe Connect classroomsMindfulness and the engaged online classroomChair yoga in the online classroom Using PhotoVoice as a teaching tool in the Adobe Connect classroomUsing a creative award presentation to review semester content and leave a lasting impactCreating a virtual quilt: A final class activity/toolUnit 3. Examples of small-group breakout activities and debriefsEnriching classroom discussions with breakout roomsEnhancing student engagement in the 10-minute breakout activity: Pre-assigning groups and rolesShowing note pods from breakout groups in one layout to debrief or monitor progress of a breakout conversation: Using a birds eye view setupKWL charts: How to implement this teaching technique in the Adobe Connect online classroom Breakout exercise for collective syllabus annotation in Adobe ConnectConcept mapping: Bringing Universal Design for Learning to the Adobe Connect classroomAn example of using the whiteboard for small breakout groups in Adobe Connect: “Draw Poverty”Scripted role play in Adobe Connect: Practicing clinical skills in an online classroomDimensions of self care: Exploring clinical issues for social workers in an online classroomThe use of polls to facilitate post-role play exercise debriefing discussions in an online skills labEnding a course with gratitude: A unique and memorable activity acknowledging student contributions to the class communityAppendixAuthor biosAdditional resources about online education from our authors

An example of using the whiteboard for small breakout groups in Adobe Connect: “Draw Poverty”

In this example, I will share how to use the whiteboard for small breakout groups in Adobe Connect. I will also share an example of a whiteboard activity I found meaningful for social work students learning in an online environment.

This submission is written from my perspective as a Live Support Specialist. I was responsible for taking the instructor’s ideas and agenda items and producing them on the Adobe Connect virtual platform with engaging and user friendly solutions. I utilized a variety of virtual tools, provided technical support, and facilitated an organized communication system for seamless “behind the scenes” collaboration during class. I also occasionally participated in the discussion or presentation of course concepts when my experience in the field of social work was solicited.

Breakout groups in the online learning environment allow for enhanced collaboration, connection, and teamwork skills building. The goals for using the whiteboard in the breakout rooms were to facilitate a creative way to discuss complex topics and to include differing engagement preferences in the virtual learning environment. The use of the whiteboard in breakout rooms also allowed for:

The course I supported for this specific activity was the PROP (power, race, oppression, and privilege) course at the Columbia University School of Social Work, learning about social justice and anti-oppressive practice. The instructor provided me with the instructions and agenda for the next class session and requested four breakout rooms with a whiteboard in each room. The instructor also requested that all whiteboards be present and visible when returning to the main room. I set up the Adobe Connect classroom with the layouts requested and we tested my proposed layouts and the activity during our instructional team meeting prior to the week’s class.

Once the breakout groups were started, the instructional team was able to view the activity of all four rooms from the “bird's eye view” layout (Image 2). A barrier to participating for some students was either a lack of a strong internet connection or joining from a mobile device. If a student lost connection during the breakout group activity, they would appear in the main room and I would return them to their assigned group.

Initially, when watching from the “bird's eye view” layout, there appeared to be little to no activity occurring on the whiteboards. The slow start was likely due to discussing the activity prompt, confusion about the instructions, or learning how to use the whiteboard tools. The instructional team was able to visit each room to answer questions and soon we were able to observe movement on the whiteboards.

At the conclusion of the activity, the breakout groups were ended and all participants were brought back to the main room for presentations and debriefing. Each group took turns presenting their whiteboards and discussing their process. Many of the drawings consisted of sadness, depravity, and loss when drawing poverty. None of the drawings approached the activity from an empowerment or strengths-based perspective with respect to people experiencing poverty. Leaving “draw poverty” up for interpretation led to a valuable discussion about assumptions and biases commonly held about people experiencing poverty by social workers in the field.

The students were receptive to the disconfirming reflection of the activity and provided the following feedback in the chat throughout the discussion:

I really enjoyed being a part of creating and facilitating this activity. This was my first time using whiteboards in breakout rooms and it provided a way for students to connect and process beyond the use of words. I felt that I also learned along with the collective as I saw how they accepted and learned from their blindspots. While the lack of instructions led to a need for additional time, the ambiguity was also what allowed the importance of this activity to surface and become revealed.

These images, including the whiteboard art, are my recreations, not a screenshot of actual students' work.

Image 1 Alt-Text: This is a screengrab of an example layout for a breakout room with the whiteboard share pod. The top of the image has a video pod that stretches across the screen to allow for multiple people to be on camera. Underneath the video pod to the left is a short and narrow chat pod. Beneath the chat pod is a short and narrow attendees pod where attendee names can be viewed. The center of the layout has the share pod with the whiteboard. The whiteboard has multiple tool options in a bar to the left that includes a pointer, marker, text box, and shape making tools. 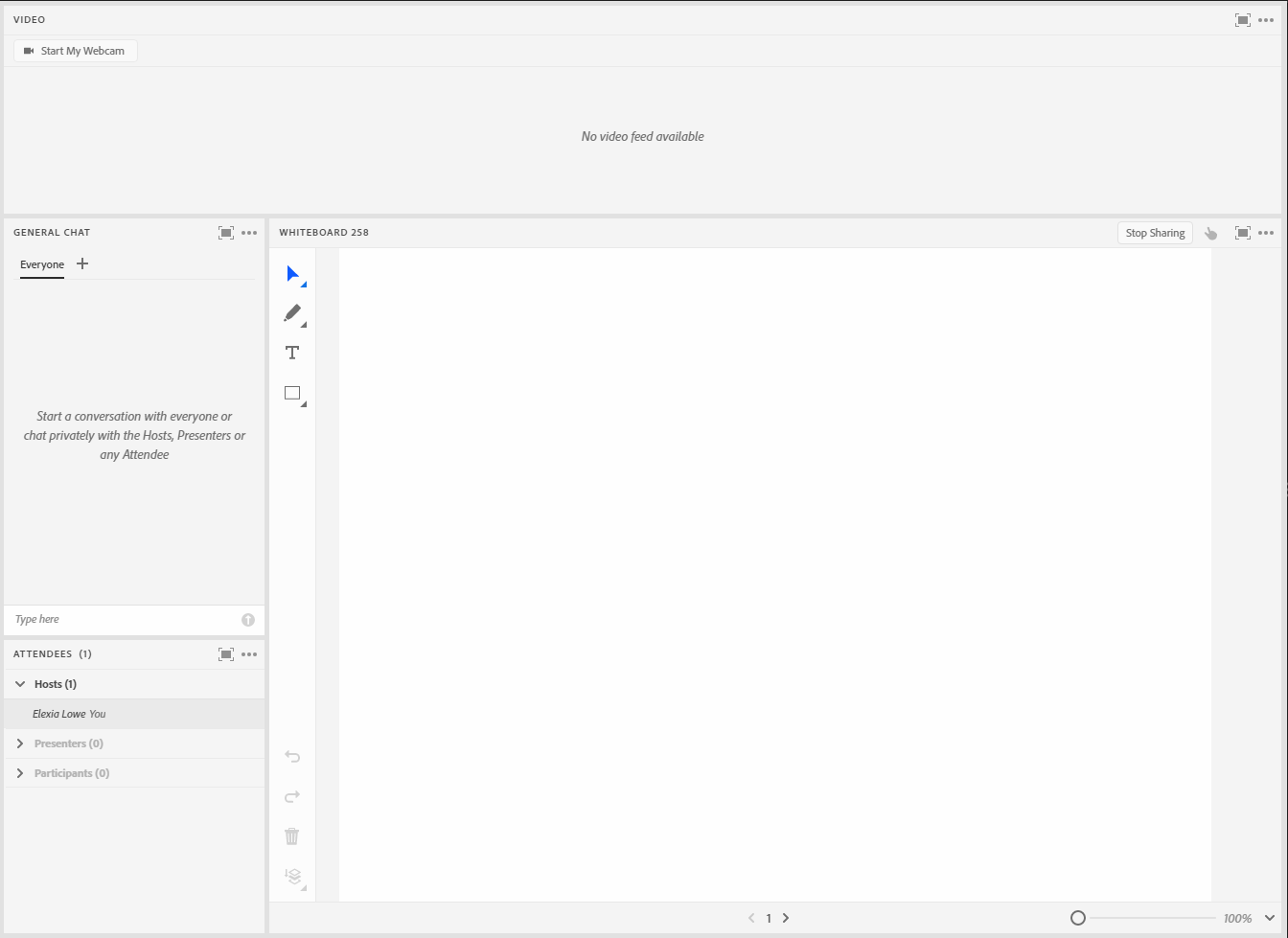 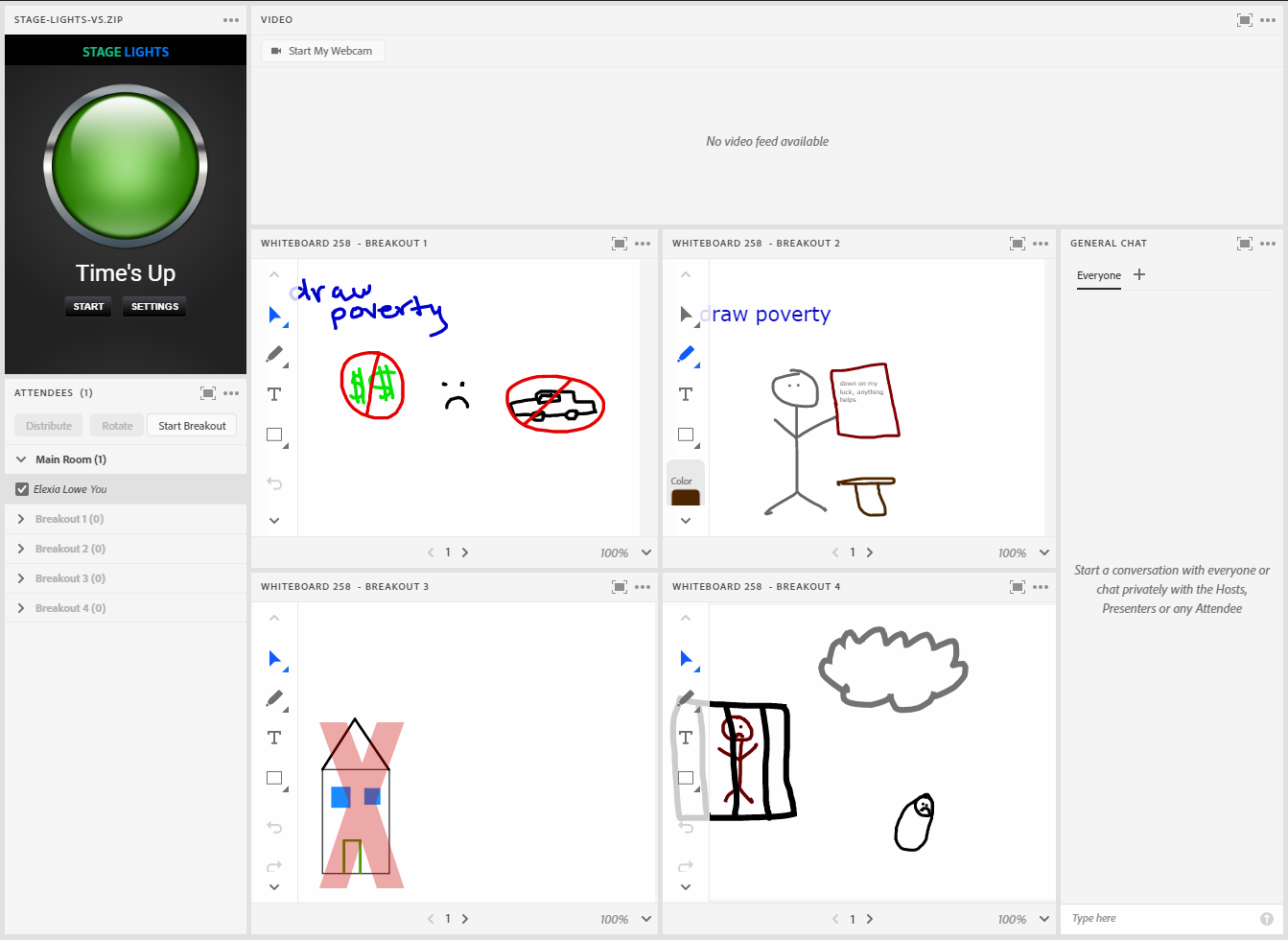 Image 3: Same image as Image 2 with one of the whiteboards enlarged and overlapping the other whiteboards. Adobe product screenshot(s) reprinted with permission from Adobe.

Image 3 Alt-Text: This screengrab is the same image from Image 2 with one difference. The bottom left whiteboard is overlapping the other whiteboards to show how to enlarge the image during presentations if needed. 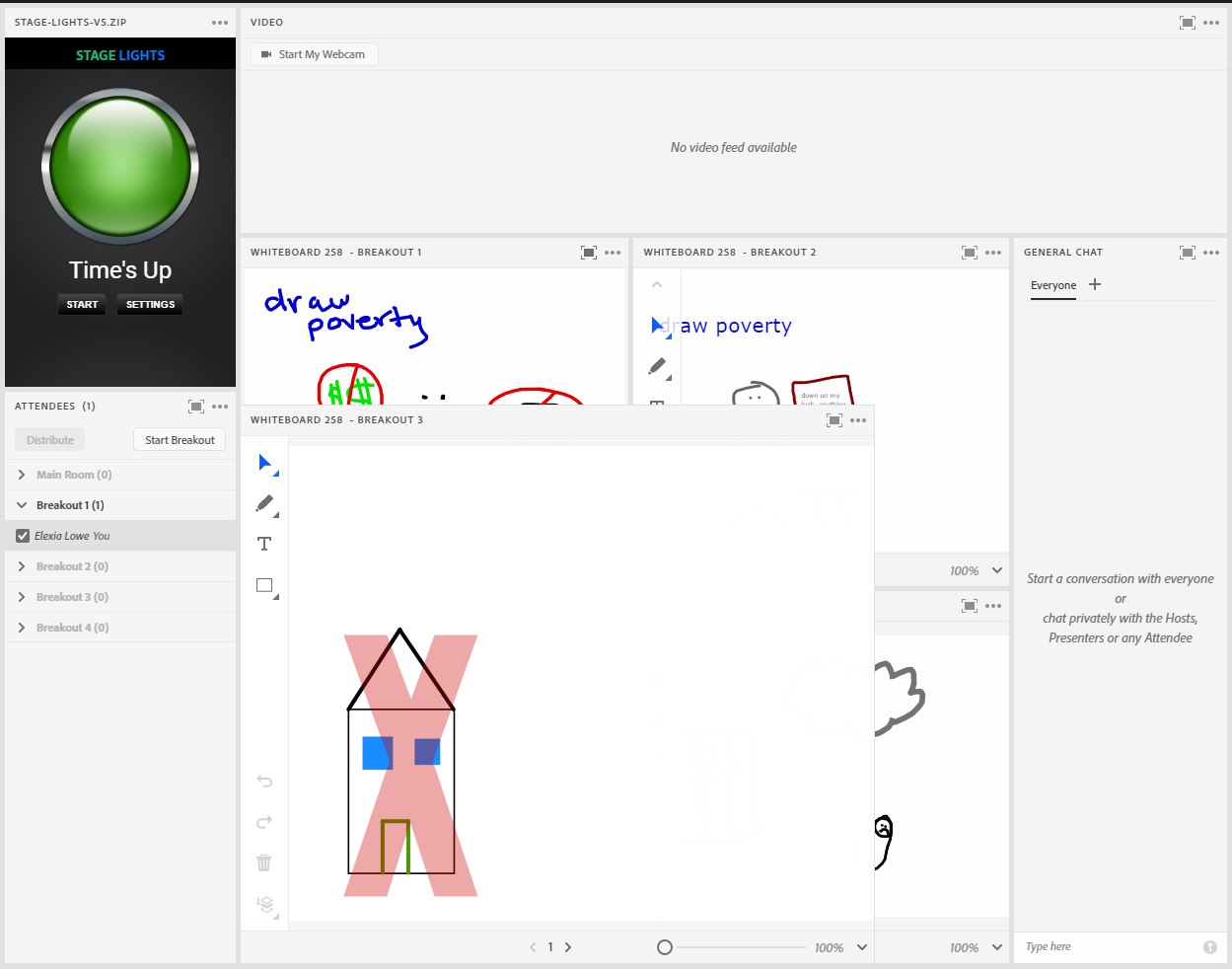 I would like to acknowledge and thank Ashley Stewart, PhD (Instructor), Hannah Tenadu (Associate), and Taryn Dwyer (Associate) for their creativity and thought leadership. Working on the PROP course with them was a wonderful experience. I would also like to thank Matthea Marquart for including and considering me for wonderful opportunities to further my career, such as contributing to this book.