What are research paradigms, and why are they important in education research?
Royce Kimmons

Imagine you are invited to work as part of a research team. You show up for your first day and discover, unbelievably, that you are joined by many famous historical figures. Whisked away from their own times, these thinkers sit down with you around a massive table, and you are tasked with working together to learn about the universe.

How do you imagine this meeting unfolding? Would Marie Curie and Carl Jung agree on fundamental assumptions about the nature of the universe? Would Galileo and Harriet Beecher Stowe agree on what should count as evidence? Would Malcolm X and Hannah Arendt agree on what the end goal should be of any work you are doing together? Would Mohandas Gandhi and Jeanne d’Arc agree on the means for achieving those goals? And ultimately would you be able to work together to do anything meaningful?

The optimist in me hopes that a room of such brilliant people could find sufficient consensus to work together toward some valuable goal, but the realist in me recognizes that the underlying worldviews of these people would make any type of joint endeavor difficult if not altogether impossible.

Why? Why might bright, capable people with common goals struggle to work together?

To answer this question, we need to recognize that the way people approach problems and even what they identify to be problems is based on certain fundamental beliefs, habits, and dispositions. It encompasses how they see themselves, how they see other people, and how they see the world.

For instance, when faced with a particular instance of human suffering, Mother Teresa might respond by rushing to the aid of the person in an attempt to alleviate their immediate needs. She would do this operating from a metaphysical belief that good and evil currently exist in the world as a result of divine design (or at least divine allowance) and also a related ethical belief that, as God's children, other people should be loved and cared for and that it is her duty to do so.

In contrast, when faced with the same scenario, Karl Marx might respond by rushing to critique and correct the social and economic system in which the human suffering originated. He does this operating from a belief that the welfare of groups of people has historically been dictated by the social and economic institutions surrounding them and that human suffering can only be overcome by correcting the systems that have allowed the wealthy and powerful to take advantage of the masses. His guiding ethical belief, then, is that all people should be equally empowered and liberated and that such liberation is a group or community affair. Marx himself famously explained this difference of perspective as follows: "When I give food to the poor, they call me a saint. When I ask why they are poor, they call me a communist."

Thus, even though Mother Teresa and Karl Marx might have similar aims to reduce human suffering, the assumptions that they make about suffering and about their roles in addressing it might be a source of friction. Karl Marx might view Mother Teresa's approaches as quaint or ultimately futile because she ignores larger social institutions and only works to address specific instances or symptoms of suffering rather than its root causes, which he believes reside in the inequitable distribution of wealth, capital, and production.

Mother Teresa, on the other hand, might equally view Karl Marx’s approaches as dangerous or ultimately futile, because he ignores individuals and only works to address historical symptoms of a deeper problem, which she believes resides in the selfishness and pride of the individual human heart.

Such differences are not trivial and are not limited to the realm of political action. For a more academic spin, we might in this imagined scenario ask any of our historical cadre of researchers how we could learn about the nature of human suffering, and they would have very different answers.

This list is an oversimplification, but it serves the point of illustrating that how these people saw the world and themselves in it would have direct impacts on how they would go about studying and interpreting it.

Even among thinkers in similar time periods and similar fields, this holds true, and even if we look squarely at the hard sciences, any historical examination of leading thinkers would fail "to reveal any gold standard research method in common, in virtue of which they all could be held to be doing science" (Phillips, 2006).

As education researchers, the situations we operate in may often feel similar to this imagined scenario, where a wide diversity of people might come together for achieving a broad, common goal, such as improving education, understanding learners, or training teachers, only to discover that our beliefs, attitudes, and methods for achieving these aims might be very different and seemingly incompatible.

This is because in education research we are typically dealing with applied or surface-level issues, problems, and questions—questions of practice, innovation, improvement, and adaptation—rather than deeper issues of existence, meaning, knowing, valuing, and being. Yet, these surface education problems that we are trying to address are nonetheless heavily influenced by deeper issues that we are not, and how we respond to these deeper issues and are shaped by them is often hidden to others and even to ourselves. 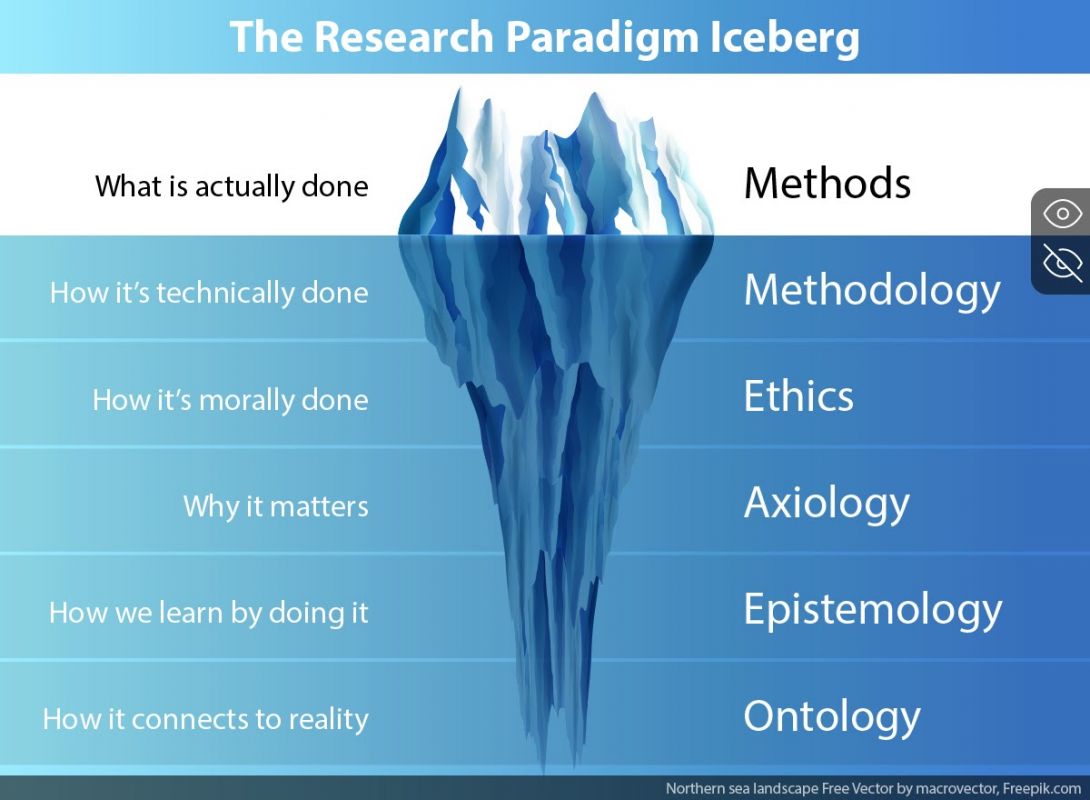 If we think of our approach to doing education research as an iceberg (Figure 1), then the visible methods we use (e.g., interviews, surveys, randomized controlled trials) may belie deep, fundamental assumptions we are making about the universe and our relationship to it, such as how our methods should technically be employed (methodology), how morality should guide those methods (ethics), why our research and the questions we ask matter (axiology), what we are able to learn by using these methods (epistemology), and how this whole endeavor connects to reality at a fundamental level (ontology).

Our paradigm, or the model or pattern we follow when conducting research (cf. Feyerabend, 1975; Kuhn, 1996), includes both our surface-level methods as well as the deeper, often hidden, beliefs, attitudes, expectations, and values that guide us.

Which of the following would NOT be part of a research paradigm?

To test this, conduct a simple experiment. Ask ten people “What is the purpose of K-12 education?” and record their answers. Odds are that you will get a wide variety of responses, including statements like “to prepare kids for jobs,” “to teach kids how to live well,” “to help kids self-actualize,” “to prepare kids for college,” “to cultivate a love of learning,” or “to sort kids for the capitalist economic machine.”

Whenever I have done this experiment (even with educators working on the same project or at the same institution), I rarely receive answers that are repeated multiple times, which means that even among those engaged in the “work of education” or surface-level problems of how to improve teaching and learning, there is little deep consensus about what the ultimate purpose of that work is and what it actually entails.

Paradigms are deep and complicated and help us understand why two people that might be engaged in solving the same problem (such as Mother Theresa and Karl Marx or Mohandas Gandhi and Jeanne d’Arc) can operate so differently from one another.

For instance, you may have heard of the “quantitative vs. qualitative” distinction in education research, where quantitative researchers utilize statistical methods to determine predictive or correlational relationships between numerically-represented data variables and qualitative researchers utilize naturalistic methods to tease apart the complexity or essential nature of phenomena being studied.

An example of this might be a quantitative researcher attempting to construct a hierarchical linear model to determine how a child not having access to lunch at school (interacting with other variables, such as family socioeconomic status, parental educational attainment, and so forth) impacts their performance on a standardized test.

In contrast, a qualitative researcher might attempt to understand what minoritized children’s experiences are like when they are expected to perform on standardized tests without their basic physiological and social needs being met.

In this case, both the quantitative and the qualitative researcher are loosely working in the realm of student lunch and academic achievement, but what they do, how they do it, and why they do it will differ greatly, because of the hidden parts of their paradigms. Some of these differences may be visible on the surface, but others won’t.

Thus, the difference between "quantitative" and "qualitative" education researchers cannot merely be that some folks like numbers and others don't. Differences go much deeper, and focusing only on the method may make us think that differences are greater than they are or, alternatively, that differences don't exist when methods simply look similar.

In this section of the book, we will explore various paradigms for approaching education research. We will not treat "qualitative" and "quantitative" as paradigms, because these terms deal only with surface-level methods or methodologies, but will instead attempt to identify some of the rich paradigmatic differences that have historically been present in education research, paying attention to deep differences and assumptions that researchers are making about the world, knowing, and being.

Which of the following would be an example of a research paradigm (in the deep sense)?

Like discussing politics, exploring and navigating such diverse paradigms can often be difficult for learners, because their stark diversity can lead to deep-seated discomfort, cognitive dissonance, and disagreement. I submit, however, that such discomfort is healthy and instructive as long as we allow ourselves to be guided by two key principles: pluralism and incommensurability (cf. Kimmons & Johnstun, 2019).

Pluralism merely means that we recognize that there might be multiple, legitimate ways of viewing the world or of solving problems (Kimmons & Johnstun, 2019). The behavioral scientist experimenting on rats in a sterile laboratory is doing very different work than the phenomenologist uncovering the experiences of students in disadvantaged schools. The two researchers are asking different questions, but both are important, and we would be reasonably concerned if the phenomenologist began treating students in disadvantaged schools like experimental rats or if the behavioral scientist began asking rats deep questions about their experiences. Phillips (2006) similarly explains that "It seems incontrovertible that Newton, Einstein, Galileo, Harvey, Pasteur, Darwin, Bohr, Boyle, Rutherford, and the Curies all were doing science, yet according to [some stipulative definitions of research], none of them was." Many types of work are legitimate and necessary. So, we don't need to engage in a process of deciding which is the one, right way of doing education research but should rather seek to recognize the benefits and limits of different paradigms for understanding the world and for solving problems.

Similarly, incommensurability merely means that we recognize that different paradigms are just that: different (Oberheim, 2018; Yanchar & Williams, 2006). They don't need to be reconcilable to one another. We don't need to understand interpretivism through a positivist lens or feminism through a pragmatist lens. Rather, we should seek to understand each paradigm on its own terms, using its own language, and avoiding the temptation to believe that different paradigms are merely different wrappers on the same box of truth. Paradigms do not need to work together, only people do, and in order for people to work together, we have to at times acknowledge and honor the depths of differences that separate us. So, interpretivism is not just a "poor person's positivism," and feminism is not just interpretivism applied to women as a group. Rather, each paradigm is distinct, rich, and deep and should be understood as its own unique entity.

Kimmons, R. (2022). Paradigms: What are research paradigms, and why are they important in education research? In R. Kimmons (Ed.), Education Research. EdTech Books. https://edtechbooks.org/education_research/paradigms