What topics have researchers been studying in the field of educational technology? 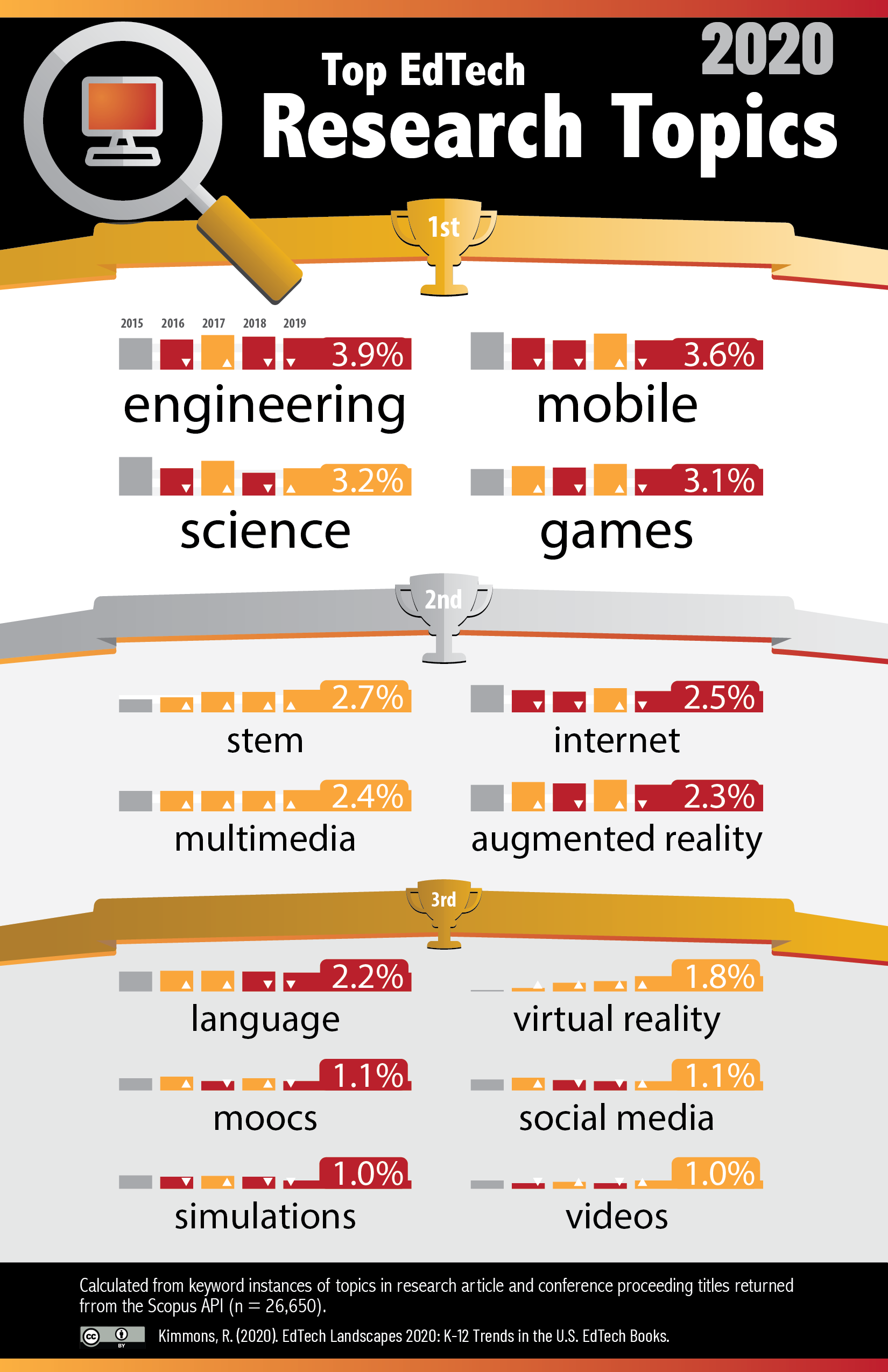 Researchers have studied educational technologies, their uses, and their effects on learning for many decades. However, since technologies emerge and evolve so quickly, it is often difficult for researchers and practitioners to remain current on what is being studied.

To remedy this, I extracted all available research articles and conference proceedings from the Elsevier article search database, using the Scopus API, that included the term “educational technology” anywhere in the title, abstract, or keyword list. I further limited analysis of results to the five most recent years — 2015 to 2019 — to identify those topics that are most relevant to the current state of the field.

With these results, I then utilized natural language processing techniques to normalize and tokenize each word in each article’s title, removing stop words (e.g., “a,” “an,” “the”), numbers, and punctuation. I also removed words that did not relate to the topic, such as context (e.g., “higher education”), participants (e.g., “students”), and generic field identifiers (e.g., “learning”).

In total, titles of 26,650 research articles and conference proceedings were analyzed in this way, representing 5,000 to 6,000 artifacts per year. To account for fluctuating volumes of articles, trends of research emphasis were determined as percentages of overall artifacts for each year. For example, a score of 3.1% for “games” in 2019 meant that 3.1% of all artifacts returned in the target year had a variant of the word “games” in the title.

Results indicated that the most researched topics in 2019 were “engineering,” “mobile,” “science,” and “games,” each representing between 3 and 4% of all artifacts (cf., Table 1). The topics of “stem,” “internet,” “multimedia,” and “augmented reality” were also common, each representing over 2% of all artifacts, and other common topics included “language,” “virtual reality,” “moocs,” “social media,” “simulations,” “videos,” and “open education.”

At least two notable trends from this list merit elaboration. First, though related in some respects, “augmented reality” and “virtual reality” exhibit some noticeable differences. From the 2015 baseline, “augmented reality” was much more popular, and it has only fluctuated slightly from year to year. “Virtual reality,” on the other hand, started off much lower than its counterpart in 2015 but has steadily increased to the point that it seems poised to overtake “augmented reality” in coming years. This shift is likely connected to the emergence of relatively low-cost virtual reality devices in the commercial market over the past few years, produced by companies such as Oculus, HTC, Valve, and Samsung.

Also of note is the finding that the subject area topics of “engineering,” “science,” and “stem” are all consistently high in this list, while other subject areas (with the exception of “language”) are not represented. This suggests that educational technology research continues to be closely aligned with STEM subject areas, while there seems to be relatively less research interest in using technologies to improve learning in other areas, such as the humanities and liberal arts.