What educational technology topics, tools, and resources have been trending on social media? 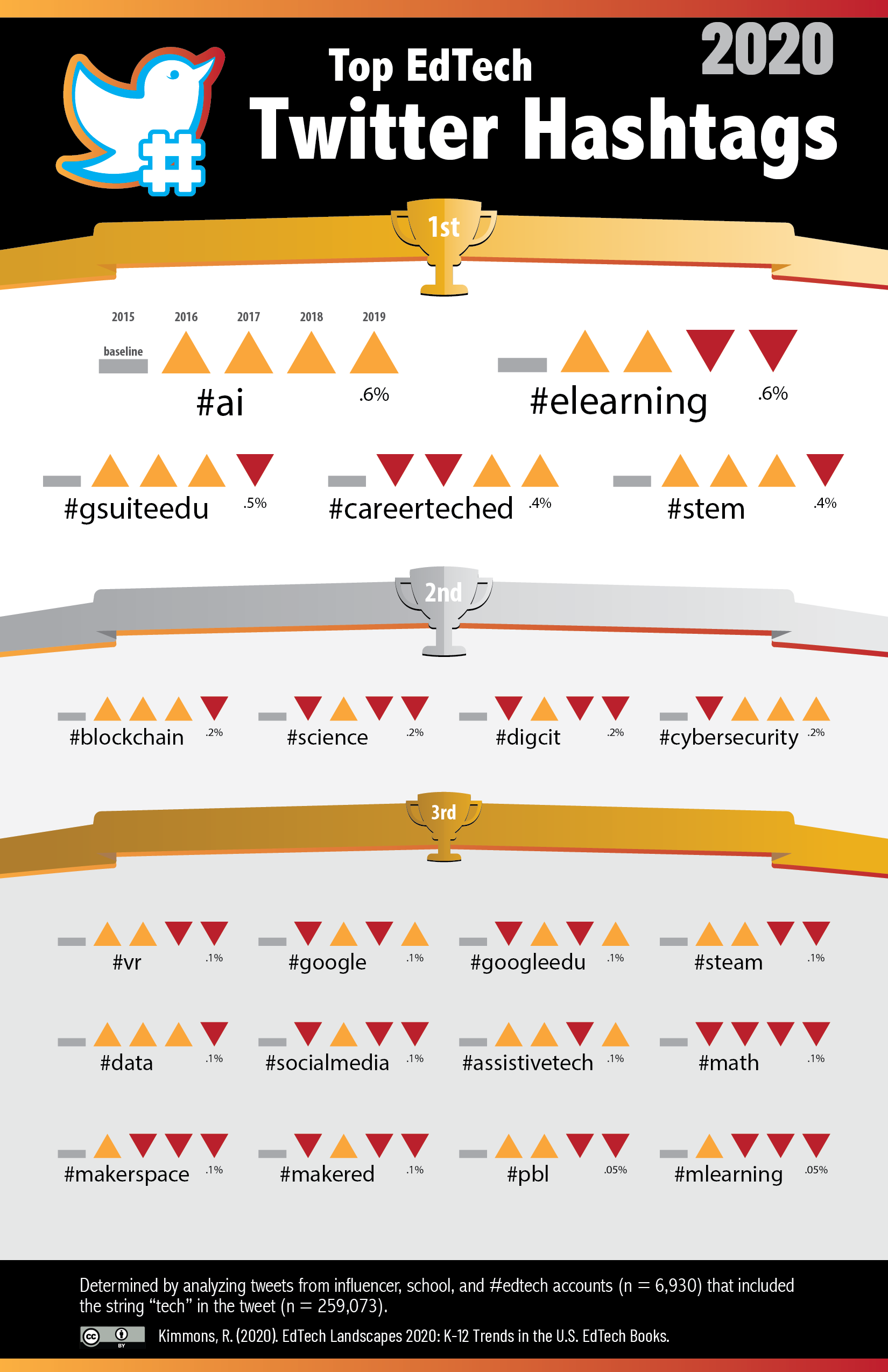 Because of their immediacy and low barrier to entry, social media serve as valuable means for educators, researchers, and others to discuss emerging educational technology topics. As innovators talk about these topics, they will often utilize identifiers such as hashtags to signal the purpose or theme of their comments, and collecting and analyzing such posts (along with their hashtags) can give us valuable insight into what topics, tools, and resources are of emerging importance to innovators.

To begin to make sense of these rich data sources, I utilized the Twitter API to collect user biographical information and tweets from 6,930 users who either (1) represented official K-12 school accounts, (2) posted to the #edtech affinity space, or (3) were returned in search results for “educational technology,” “edtech,” “classroom technology,” or “K-12 technology.” I collected all available original English-language tweets for these users (n = 7.6 million, excluding retweets and non-targeted years) and then narrowed analysis to only include those tweets that mentioned the word stem “tech” (n = 259,073). 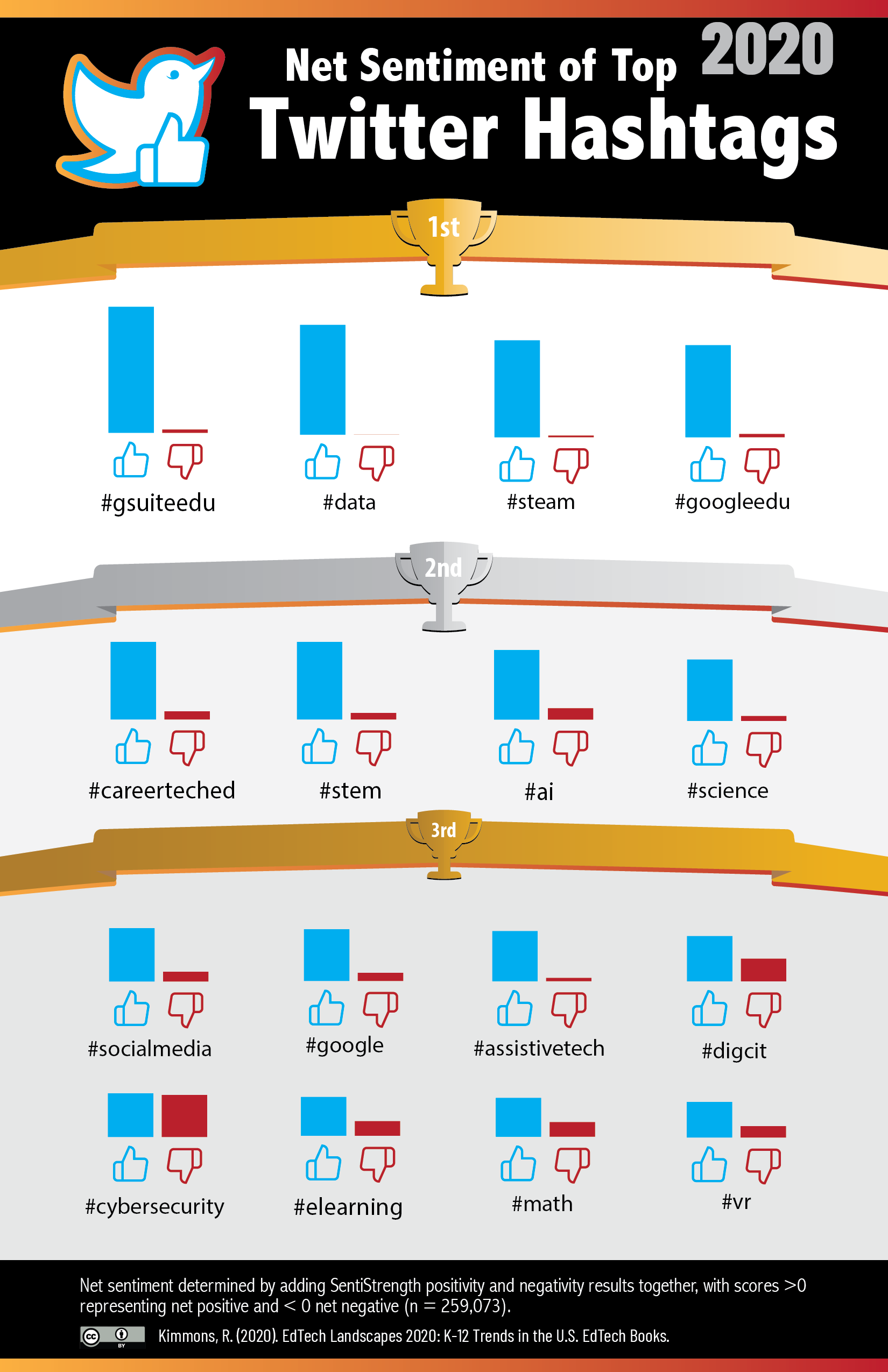 I then extracted all hashtags from these tweets, focused on those hashtags that referenced topics or tools (rather than generic or contextual terms like “#education”), and conducted sentiment analysis on hashtagged tweets (using SentiStrength) to determine the positivity and negativity exhibited in each.

Results indicated that the most popular hashtags for 2019 included “#ai,” “#elearning,” “#gsuiteedu,” “#careerteched,” and “#stem,” followed by “#blockchain,” “#science,” “#digcit,” and “#cybersecurity” (cf., Table 2). Of these top hashtags, only “#ai” saw increased usage each year, while “#gsuiteedu,” “#stem,” “#blockchain,” “#cybersecurity,” “#data,” and “#assistivetech” saw increases for three of the four years. The hashtag “#math” was the only one to see decreased usage each year.

Net sentiment of these (and other) prominent hashtags revealed that most were sentiment neutral (e.g., sharing a resource or link without any evaluative statements), but among those that did exhibit sentiment, most were positive (cf., Table 3). Notably, the hashtags with the most positivity included Google tools like “#gsuiteedu” and “#googledu,” the subject area “#steam,” and the broad topic of “#data.” Some net positive examples included the following:

In contrast, the hashtag "#cybersecurity" exhibited the most net negativity, revealing that many tweets using this hashtag focused on fears and frustrations, such as:

However, the net positivity of these tweets overall is noteworthy given larger trends toward critiquing some of these topics, such as AI and social media, and may suggest that the educational technology community has a generally more technophilic and less critical attitude toward these emerging technologies than the population at large.

Most Popular Twitter Hashtags Related to Educational Technology in 2015-2019