In October, 2021, California passed a Gender Neutral Retail Departments law requiring all large scale department stores (500 or more employees) to maintain a "reasonable" number of toys and other items for children in a gender-neutral area of the store. The law does not ban traditional boys and girls sections, but does force changes in how and where items are marketed in stores. 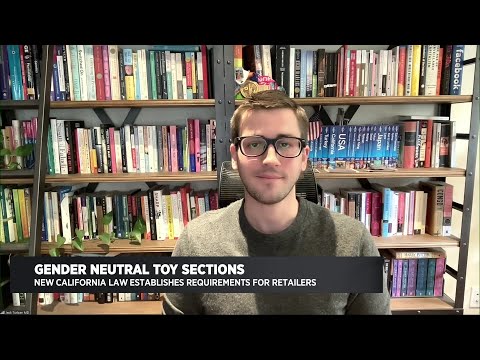 Consumer advocates supported this first-in-the-nation law as a response to how traditional marketing to children has reinforced gender-stereotypes and reinforced some skill and mindset over others (boys' toys for example emphasize construction, movement, and building). Critics claim this law is a form of government interference on the rights of parents to raise children as they see fit.

Also in 2021, the toymaker LEGO announced it would no longer label its products by gender (LEGO to Remove Gender Bias from its Toys after Findings of Child Survey, October 10, 2021). LEGO took action following a study by the Geena Davis Institute on Gender in Media that found 71% of boys feared they would be made fun of if they played with what are considered to be "girls" toys.

Gendered toy marketing has a huge impact on how items are perceived by both children and adults. To see this dynamic in action, try the Gendered Advertising Remixer at https://genderremixer.com/. Put an ad targeting boys in box 1 and an ad targeting girls in box 2 and press mashup and watch what happens.

In this activity, you will critically examine how children's toys are marketed and then share your thoughts in an Op-Ed commentary or advocate for new legislation.

Building Democracy for All: Gender-Inclusive, Non-Binary, and Anti-Racist Language and Images in State Constitutions, Laws, and Materials