3.3: Members of Congress' Use of Social Media

Congress Soars to New Heights on Social Media declared the Pew Research Center in July 2020. Virtually every member of the Senate and the House of Representatives is now active on social media, including Twitter, Facebook, Instagram, and YouTube. Members of Congress share information with voters, react to events, and take positions on public policy issues, all while seeking to add more followers to their accounts.

The volume of social media content generated by Congress is huge. Scholars from the Pew Research Center noted that "as a collective, the 116th Congress maintains over 2,000 active official, campaign and personal accounts on Facebook and Twitter (not counting institutional accounts that periodically change hands, such as committee chair or leadership accounts) with over a quarter-billion total followers between them" (2020, para. 8). Congressional accounts generated 100,000 tweets and Facebook posts every month, on average, in 2020. Between 2016 and 2020, Democrats posted more often on Twitter while Republicans had greater levels of engagement with others as measured by reactions, shares, favorites, and retweets.

Some members of Congress have become social media "stars" in that they have large numbers of followers and they exert considerable influence on political matters. They are in the news all the time. In 2019, for example, Senators Bernie Sanders (I-Vt.), Elizabeth Warren (D-Mass), Ted Cruz (R-Tex), Corey Booker (D-NJ), and Rep Alexandria Ocasio-Cortez (D-NY) were most active on Twitter (For more, see "Their Public Whatever and Their Twitter World," The Washington Post Magazine, August 27, 2019). 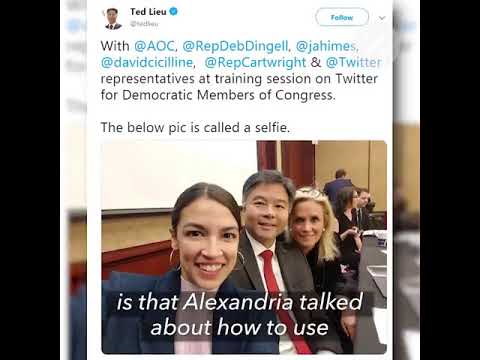 The following activities encourage a critical in-depth exploration of how members of congress use social media.

Activity 1: Analyze the Social Media Activity of Members of Congress

In this activity, you will investigate and document the social media presence of at least two members of Congress. You can choose individuals who are in the news, who represent your state or Congressional district, or who come from different regions of the country or from different political parties.

Political campaigning has evolved over the years. William Henry Harrison was the first candidate to actively campaign for the office of President in 1840 using the slogan "Tippecanoe and Tyler too" (referring to his leadership in a famous 1811 battle between U.S. soldiers and Native American warriors in Indiana; John Tyler was his vice-Presidential candidate who became President when Harrison died suddenly after taking office). But mainly during the19th century, candidates did not campaign out in public, instead they worked behind the scenes to secure support and votes.
Mass media changed has changed political communication between politicians and people. "Eisenhower Answers America" (1952) is considered the first political ad broadcast on television. The first televised political debates happened in 1960 between John F. Kennedy and Richard Nixon. Today we follow politicians’ every move through social media (e.g., watching AOC assembling her house furniture or Elizabeth Warren opening a New Year’s beer on Instagram).

Building Democracy for All: Congress, the House of Representatives, and the Senate