Topic 4. The Rights and Responsibilities of Citizens

“A citizen is a participatory member of a political community. Citizenship is gained by meeting the legal requirements of a national, state, or local government” (Center for the Study of Citizenship, Wayne State University, 2021, para. 6).

Image by ArtsyBeeKids is under Pixabay License

In the United States, both citizens and non-citizens have rights and responsibilities in their civic, political, and private lives. They enjoy the freedoms of a democratic society while having responsibilities that they are expected to perform, including obeying laws, voting in elections, working with elected leaders, engaging in peaceful protests, and affirming the fundamental principles of American political and civic life.

U.S. history has numerous examples of individuals who showed political courage and leadership in support of democratic values and freedoms, but it also includes multiple times when individuals and groups failed to live up to the ideals of the Declaration of Independence and the Constitution. In modern society, public and private interest groups, political action committees, and labor unions, more than individual citizens, play powerful roles in lobbying for social and economic change.

The media literacy activities in this section explore topics related to citizen engagement and involvement in politics and society, including immigration, the COVID-19 pandemic, voting, gender in leadership, trans identities, political activism, political protest, political advertising, and the January 6, 2021 insurrection. 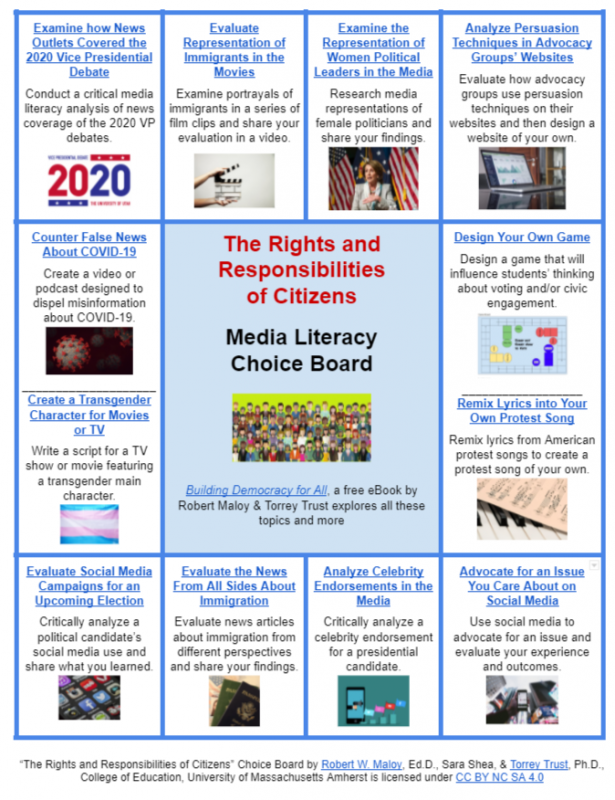 4.1: Immigration in the News4.2: Portrayals of Immigrants in Television and Film4.3: COVID-19 Information Evaluation4.4: Women Political Leaders in the Media4.5: Online Messaging by Special Interest Groups4.6: Digital Games for Civic Engagement4.7: Social Media and the Elections4.8: Images of Political Leaders and Political Power4.9: Media Spin in the Coverage of Political Debates4.10: Celebrities' Influence on Politics4.11: Political Activism Through Social Media4.12: Media Recruitment of Public Sector Workers4.13 Deciding What Books Students Read in School4.14: Images of Teachers and Teaching4.15: For Whom Is and Could Your School Be Named4.16: Representing Trans Identities4.17: Media Framing of the Events of January 6, 20214.18: Music as Protest Art4.19: PACs, Super PACs, and Unions in the Media4.20 Brands and Politics