This was originally posted to Bon Stewart's blog (as part of an online course) on May 6, 2012.

This week’s discussion bridges from and builds on last week’s topic, facilitated by George Veletsianos. Like George’s work, mine focuses on practices and participation and how these function. George, however, looks specifically at scholars: my interest is in the broader concept of identity and how we are shaped by our digital practices.

George’s work is premised in looking at what Selwyn & Grant call the “state of the actual;” my work straddles both actuality and potentiality.  I am interested in what we do that makes us who we are in social media spaces, thus my concept of digital identity is practice-based. At the same time, I see identity as a lens through which we can examine the potentialities specific to social networks. I use the concept of identity to explore what it is that social software makes possible in practice.

The Wikipedia definition of “digital identity” frames it, more or less, as the set of data constituted by a person’s interactions online, and that specific user’s psychological relationship to his or her data trail.

For the purposes of our discussion this week, I’d like to expand the definition beyond the traces and trails we leave behind for Google to find, and frame digital identities as the selves brought into being by the affordances – the specific structures and norms – of social media and what danah boyd calls “networked publics.”

Here’s a short(ish) introductory video to some of the basic premises of this week’s discussion. 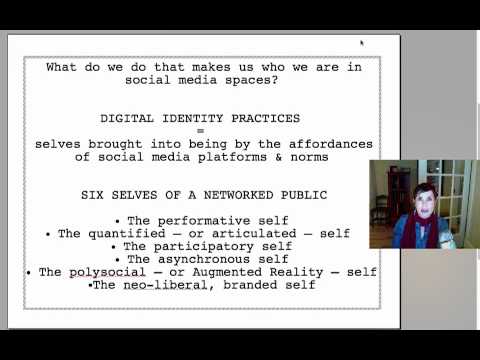 If you’d like to delve a little deeper than just the video, below are six key digital “selves” that I’d like to discuss and explore this coming week. They’re by no means an exhaustive list, so input and additions are very welcome, but they introduce some of the ways in social media norms and affordances impact identity practices. Links offer a bit of further reading – formal papers, blog posts, videos, all sorts of resources – in each of these directions. Following those trails is, of course, optional.

In the livechat on Wednesday, these six aspects of digital identity – and the implications they hold for higher education – will be the focus of our discussion.

1. The Performative, Public Self

The networked self is neither a discrete, unique snowflake that can be examined entirely unto itself, outside relationality, nor a generic group member. The networked self is linked in multiple, complex, individual node-to-node relationships with others as part of an ever-shifting public. It is also performative, constituting itself within that public through its practices and gestures.

Within network publics the performative self experiences both the flattening of hierarchies across space and status (I talked to theorist Henry Giroux on Twitter the other day! And he followed me back! Yay! Access!) and the network theory principle that big nodes are more likely to attract attention and links (Giroux didn’t actually talk back to me. Boo. Sniff. But his semi-celebrity status in the world of academia means he’s always going to have a wider pool of people aware of him and clamouring for his attention).

The performative self in networked publics tends to be conscious of his or her multiplicity and performative nature: Rob Horning’s post on the data self does a very entertaining job of encapsulating much of how this self differs from previous cultural conceptions of identity and subjectivity.

2. The Quantified – or Articulated – Self

In social networks, our network contacts are visible and articulated, and our actions and contributions are quantified. This makes the act of choosing to follow or “friend” another person always already a public, performative statement (see above) and likewise a notch in the belt of one’s personal metrics. Status and scale in social networks are frequently treated as overtly measurable attributes, tracked in clicks and follows and @s and likes by tools like Klout: I have hesitancies about the applications and limitations of algorithms as stand-ins for identity, especially when we begin to think about the self in learning contexts.

The participatory, networked self is not only mobile and connected, never fully disengaged from the communications of the network, but is able to engage and contribute at a click to the self-presentation of others. This is based in part on the produsage or prosumer nature of networked publics, merging production and consumption: within my networks I am both a creator of my own content but also a consumer of that which my peers produce and share. My relationships are groomed by the constant iterative work of participation, and my comfort with working in isolation towards a final product – as was the paper model of creative work – recedes in the rear-view mirror.

Simply put: I hate when my phone rings. And I’m not alone. Digital sociality practices and networked publics moved increasingly towards asynchronous mediated communications, rather than the interruptive, immediate demands of telephones. Last night, as I tried to record the video for this post, my stepmother called. Twice. I rest my case? ;)

5. The PolySocial – or Augmented Reality – Self

Contrary to much of the digital identity scholarship of the 1990s, which tended to emphasize the fluidity of identity uncoupled from the gendered and signified body – the “on the Internet, nobody knows you’re a dog” theme – the concept of networked publics has given rise to a far more enmeshed notion of reality. Drawing from this, my work frames digital identities not as virtual selves, but as particular subjects brought into being by our relational, mobile interactions in the world of bits and extending into the world of atoms.  My networks and relationships – and therefore my identities – exist within the enmeshed and multi-faceted realities of contemporary human interaction.

On the cyborgology blog, Nathan Jurgenson, PJ Rey et al have done an exceptional job of examining and detailing the complexities of what they call Augmented Reality, or the enmeshed and mutually influential confluence of atoms and bits. Sally Applin and Michael Fischer offer the somewhat differently framed concept of PolySocial Reality to explore the interoperability of contemporary contexts.

And from the perspective of someone who once pretended to be a dog, Alan Levine (@cogdog) has a great video keynote narrating his experiences as a self in the enmeshed world of atoms and bits.

6. The Neo-Liberal, Branded Self

Our social networking platforms are increasingly neo-liberal “Me, Inc” spaces where we are exhorted to monetize and to “find our niche.”  I’ve argued that in these spaces, no matter how we choose to perform our identity, we end up branding ourselves.

So. Six starting places for conversation. Recognize any of these? Do any resonate with your own practices?

And have any of them been part of your #change11 experience? I’m hoping that the discussions this week will serve as a bit of a retrospective for the course, from a polysocial identity point of view: how has participation (even peripheral participation) in a distributed, networked learning experience like this shaped your sense of self?