There are three foundational psychologists of constructivism. Jean Piaget falls into the radical constructivism camp. Lev Vygotsky, on the other hand, concentrates on the social aspects of learning through experiences. John Dewey straddles the line between the two perspectives and has many ideas that match with each side. The common ground that united these psychologists under the umbrella of constructivism is that all three believed that the learning theories (e.g behaviorism and humanism) at the time did not adequately represent the actual learning process. In addition, their ideas were rooted in experiences in the classroom instead of experiments in a lab (compared to behaviorism).

Jean Piaget is known as one of the first theorists in constructivism. His theories indicate that humans create knowledge through the interaction between their experiences and ideas. His view of constructivism is the inspiration for radical constructivism due to his idea that the individual is at the center of the knowledge creation and acquisition process. The vast majority of Piaget’s theories develop through working with children where he would challenge the idea that children are inferior thinkers compared to adults. His work provides evidence that children are not cognitively inferior to adults. He proves that children develop differently by establishing a theory involving cognitive stages.

Piaget’s cognitive theory explores how children develop. His theory splits development into four discrete stages. Although Piaget never linked his research on cognitive development to education directly, his theory plays a pivotal role in his contributions to learning theories.

Based on the research into children’s cognitive development Piaget identified processes of accommodation (reframing one's mental representation of the external world to fit new experiences) and assimilation (the process by which a person or persons acquire the social and psychological characteristics of a group) which are key in the interaction between experiences and ideas. These two processes focus on how learning occurs rather than what influences learning.

Lev Vygotsky’s work contains a central scope focused on the social aspects of acquiring knowledge. He suggests that one learns best through interacting with others. Through the process of working with others, learners create an environment of shared meanings with peers. By being immersed in the new environment, the learner is able to adapt subjective interpretations to become socially accepted. Vygotsky especially emphasizes that culture plays a large role in cognitive development. He believed infants were born with basic abilities to develop cognitively. Those basic abilities are then enhanced through interaction with others and eventually grow into more sophisticated mental processes. For example, a child is born with the basic ability to memorize. As the child interacts with its environment and peers, the methods of remembrance adapt. If the child is in a learning setting that emphasizes flashcards, the child will use similar methods of repetition to improve memory.

Similar to Piaget’s adaptation of radical constructivism from his theory of cognitive development, Vygotsky draws from his own theory of social development. Vygotsky believed that learners could achieve much greater level of learning through the help of a More Knowledgeable Other (instructor). Figure 1 offers a visual of where the instructor can offer the most support and enhance the learning process. The area where the instructor should be most sensitive to guidance is the Zone of Proximal Development (ZPD). As Figure 1 displays, the ZPD straddles the line between what the student already knows and a new concept unable to be mastered without the help of the instructor.

A Graphic Displaying the Pieces of Vygotsky’s Social Development Theory 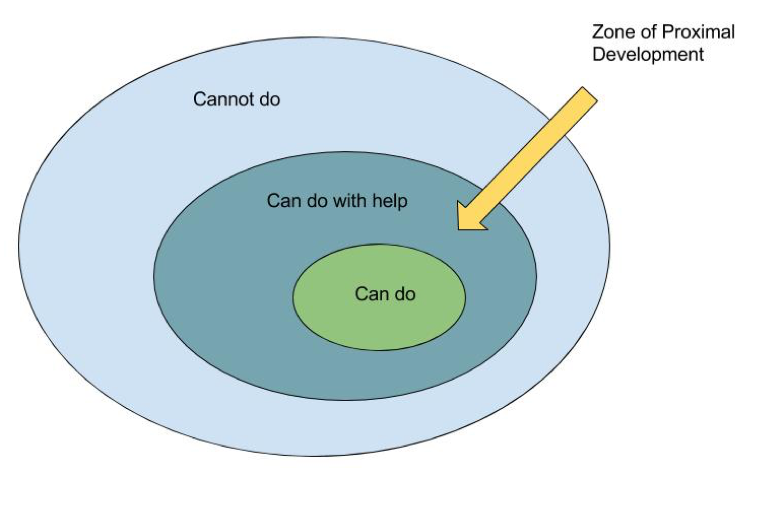 The Zone of Proximal Development is not confined to solely a learner and an instructor. Vygotsky encourages learners to form groups. The formation of groups allows for the less competent children to learn from those who already have mastered a specific skillset.

Contrary to the assumptions of those who pair Dewey and Piaget based on progressivism’s recent history, Dewey shared broader concerns with Vygotsky (whose work he never read). Both Dewey and Vygotsky emphasized the role of cultural forms and meanings in perpetuating higher forms of human thought, whereas Piaget focused on the role played by logical and mathematical reasoning. On the other hand, with Piaget, Dewey emphasized the nurture of independent reasoning central to the liberal Protestant heritage the two men shared. Indeed, Dewey’s broad theorizing of democracy’s implications for schooling can be seen to integrate the research emphases of the two psychologists (p. 6).

Just as Piaget and Vygotsky did not believe in rote memorization and repetitive lecturing, Dewey’s work proclaims that learners who engage in real world activities will be able to demonstrate higher levels of knowledge through creativity and collaboration (Behling & Hart, 2008). One of Dewey’s most recognized quotes is: “If you have doubts about how learning happens, engage in sustained inquiry: study, ponder, consider alternative possibilities and arrive at your belief grounded in evidence” (Reece, 2013, p. 320).

Dewey’s emphasis on inquiry sustaining learning is sparked best by ensuring a synthesis of environment. Many teachers at the time insisted on keeping school separate from the rest of the children’s lives. Dewey did not adhere to the pressure of separation. His research insists that learners need to connect real life experiences with school activities in order to make learning possible.

A basic understanding of constructivism requires a clear vision of what it means to allow a learner to connect their own experiences to new knowledge. In order to better illustrate the use of constructivism in the classroom, the next section describes the role of both the learner and the instructor.

Radical constructivism assumes the learner recognizes their place at the center of the knowledge creation and acquisition process. The learner works through a process of acquisition and assimilation. A major role of the learner is to reflect on past experiences and be conscious of the variables affecting the absorption of the new knowledge. Social constructivism expects similar reflection from the learner, however it also incorporates the social aspects of learning.

Social constructivism not only acknowledges the uniqueness and complexity of the learner, but actually encourages, utilizes and rewards this complexity as an integral part of the learning process. This means that the learner is motivated to reflect on their unique knowledge and allows them to recognize their ability to inspire other learners in their environment. The constant exchange of ideas in the ZPD allows each individual learner to acquire new understandings from their peers. While the learners hold the key to acquiring knowledge in the constructivist framework, the role of instructors is still significant.

Due to the nature of constructivism, the instructor must adapt a more hands-on approach instead of the traditional lecture style. The environment of the classroom should be supportive of each individual learner’s thinking and encourage a constant challenge.

According to the social constructivist approach, instructors have to adapt to the role of facilitators and not teachers (Bauersfeld, 1995). A facilitator helps the learner to get to his or her own understanding of the content instead of simply explaining a principle. In the latter scenario, the learner does not participate definitively, and in the former scenario, the learner is actively engaged. The goal is thus to turn the emphasis away from the instructor and the content and towards the learner (Gamoran, Secada, & Marrett, 1998). As the emphasis switches to a more active teaching process, the facilitator must act in a different way than a teacher would (Brownstein 2001). As one author explains:

There are various examples in the world of education regarding methods of implementation of constructivism. Constructionism, cooperative learning and large-scale lessons are three examples of ways to incorporate constructivism into a classroom.

Constructionism is one application of constructivism. An example of constructionism is an instructor teaching a class of learners about engineering by assigning them to build a bridge. The process the learners would embark on to learn how to build a bridge would in theory teach them all the nuances of engineering concepts. The learning would come mostly through trial and error as the learners adapted their past experiences to the current task.

According to research, cooperative learning is an effective way to implement constructivism in the classroom (Hoy & Woolfolk, 1993). Three examples of cooperative learning are reciprocal questioning, jigsaw classroom and structured controversies. Reciprocal questioning is where students work together to ask and answer questions. This technique is often prevalent through activities such as book discussion groups. Jigsaw classroom refers to assigning students to become experts on one part of a group project and teach it to the others in their group. Structured controversies are where students work together to research a particular controversy.

Another effective implementation of constructivism in the classroom is teaching big topics and allowing each learner to find what pieces relate to them most. For example, an instructor teaching evolution does not choose a specific point in evolution to focus on, but rather gives an overarching explanation. Thus, a student who relates with natural selection is interested in the topic of their own will and chooses to write a paper on it and share with the class.

Novice learners should have more structure (Jonassen, 1992). According to Bloom’s Taxonomy (cf. Fig. 3), the process of learning first starts with remembering and understanding. These two bases require structure to ensure the learner can memorize the subject and recall why the information is important. Without the beginning structure, the learner would struggle to get to the level of application. The lack of structure becomes a possible limitation if the student does not have any base to begin with. However, both Piaget and Vygotsky believe in innate abilities that act as the initial building blocks to learning.

When a group of learners is involved in an activity together, there is a possibility of the learners falling into groupthink (Ruggie, 1998). While not a lot of research has been done on the subject, the author of the chapter suggests that this may be a limitation which could be further investigated. Those who do not agree with the dominant narrative of a group will not participate as much as those who align with the majority. This is a critique of the implementation, however, and not the theory itself.

Because the nature of constructivism is more abstract and applicable, it is difficult to know if the observed learning outcomes account for everything. Outcomes are generally measured through some form of a rote test and thus do not often incorporate the application and extrapolation of the learning. This could be a limitation of constructivism, if the mode of measurement is not conducive to reflection.

Another possible limitation of constructivism is the time required during implementation. Operating under the constructivist framework, instructors are expected to spend more time engaging the learner. In order to engage the learner, the instructor needs to spend more preparation time out of the classroom thinking about new activities. The instructor also carries the role of allowing time for reflection. Effectively using time can prove to be a problem of constructivism, but it can be fixed through thoughtful implementation.

In conclusion, constructivism is a learning theory which affirms that knowledge is best gained through a process of action, reflection and construction. Piaget focuses on the interaction of experiences and ideas in the creation of new knowledge. Vygotsky explores the importance of learning alongside peers and how culture affects the accommodation and assimilation of knowledge. Dewey emphasizes inquiry and the integration of real world and classroom activities. The constructivist framework relies on the learners to be in control of their own acquisition of knowledge and encourages the instructor to serve as a facilitator. Constructivism has limitations, but it can allow for the learner to reach higher planes of knowledge than would be possible otherwise (Jonassen, 1993).

Brau, B. (2018). Constructivism. In R. Kimmons, The Students' Guide to Learning Design and Research. EdTech Books. Retrieved from https://edtechbooks.org/studentguide/constructivism