In an educational setting, design-based research is a research approach that engages in iterative designs to develop knowledge that improves educational practices. This chapter will provide a brief overview of the origin, paradigms, outcomes, and processes of design-based research (DBR). In these sections we explain that (a) DBR originated because some researchers believed that traditional research methods failed to improve classroom practices, (b) DBR places researchers as agents of change and research subjects as collaborators, (c) DBR produces both new designs and theories, and (d) DBR consists of an iterative process of design and evaluation to develop knowledge.

Proponents of DBR claim that educational research is often detached from practice (The Design-Based Research Collective, 2002). There are at least two problems that arise from this detachment: (a) practitioners do not benefit from researchers’ work and (b) research results may be inaccurate, because they fail to account for context (The Design-Based Research Collective, 2002).

Not only is lack of relevance a problem, but research results can also be inaccurate by failing to account for context. Findings and theories based on lab results may not accurately reflect what happens in real-world educational settings.

Conversely, a problem that arises from an overemphasis on practice is that while individual practices may improve, the general body of theory and knowledge does not increase. Scholars like Collins (1990) and Brown (1992) believed that the best way to conduct research would be to achieve the right balance between theory-building and practical impact.

Proponents of DBR believe that conducting research in context, rather than in a controlled laboratory setting, and iteratively designing interventions yields authentic and useful knowledge. Sasha Barab (2004) says that the goal of DBR is to “directly impact practice while advancing theory that will be of use to others” (p. 8). This implies “a pragmatic philosophical underpinning, one in which the value of a theory lies in its ability to produce changes in the world” (p. 6). The aims of DBR and the role of researchers and subjects are informed by this philosophical underpinning.

Traditional, experimental research is conducted by theorists focused on isolating variables to test and refine theory. DBR is conducted by designers focused on (a) understanding contexts, (b) designing effective systems, and (c) making meaningful changes for the subjects of their studies (Barab & Squire, 2004; Collins, 1990). Traditional methods of research generate refined understandings of how the world works, which may indirectly affect practice. In DBR there is an intentionality in the research process to both refine theory and practice (Collins et al., 2004).

In DBR, researchers assume the roles of “curriculum designers, and implicitly, curriculum theorists” (Barab & Squire, 2004, p.2). As curriculum designers, DBR researchers come into their contexts as informed experts with the purpose of creating, “test[ing] and refin[ing] educational designs based on principles derived from prior research” (Collins et al., 2004, p. 15). These educational designs may include curricula, practices, software, or tangible objects beneficial to the learning process (Barab & Squire, 2004). As curriculum theorists, DBR researchers also come into their research contexts with the purpose to refine extant theories about learning (Brown, 1992).

This duality of roles for DBR researchers contributes to a greater sense of responsibility and accountability within the field. Traditional, experimental researchers isolate themselves from the subjects of their study (Barab & Squire, 2004). This separation is seen as a virtue, allowing researchers to make dispassionate observations as they test and refine their understandings of the world around them. In comparison, design-based researchers “bring agendas to their work,” see themselves as necessary agents of change and see themselves as accountable for the work they do (Barab & Squire, 2004, p. 2).

DBR educational research develops knowledge through this collaborative, iterative research process. The knowledge developed by DBR can be separated into two categories: (a) tangible, practical outcomes and (b) intangible, theoretical outcomes.

A major goal of design-based research is producing meaningful interventions and practices. Within educational research these interventions may “involve the development of technological tools [and] curricula” (Barab & Squire, 2004, p. 1). But more than just producing meaningful educational products for a specific context, DBR aims to produce meaningful, effective educational products that can be transferred and adapted (Barab & Squire, 2004). As expressed by Brown (1992), “an effective intervention should be able to migrate from our experimental classroom to average classrooms operated by and for average students and teachers” (p.143).

It is important to recognize that DBR is not only concerned with improving practice but also aims to advance theory and understanding (Collins et al., 2004). DBR’s emphasis on the importance of context enhances the knowledge claims of the research. “Researchers investigate cognition in context...with the broad goal of developing evidence-based claims derived from both laboratory-based and naturalistic investigations that result in knowledge about how people learn” (Barab & Squire, 2004, p.1). This new knowledge about learning then drives future research and practice.

A hallmark of DBR is the iterative nature of its interventions. As each iteration progresses, researchers refine and rework the intervention drawing on a variety of research methods that best fit the context. This flexibility allows the end result to take precedence over the process. While each researcher may use different methods, McKenny and Reeves (2012) outlined three core processes of DBR: (a) analysis and exploration, (b) design and construction, and (c) evaluation and reflection. To put these ideas in context, we will refer to a recent DBR study completed by Siko and Barbour regarding the use of PowerPoint games in the classroom.

The Iterative Process of Design-Based Research 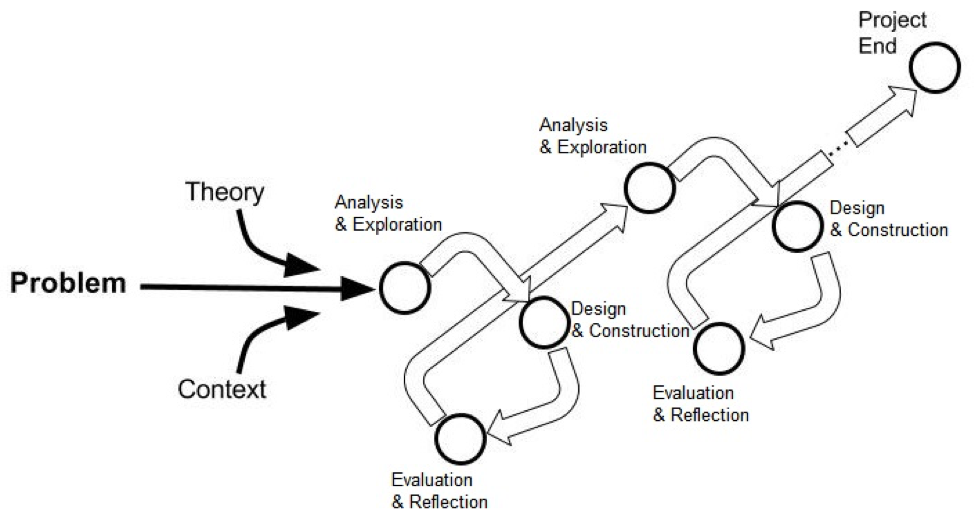 Analysis is a critical aspect of DBR and must be used throughout the entire process. At the start of a DBR project, it is critical to understand and define which problem will be addressed. In collaboration with practitioners, researchers seek to understand all aspects of a problem. Additionally, they “seek out and learn from how others have viewed and solved similar problems ” (McKenny & Reeves, 2012, p. 85). This analysis helps to provide an understanding of the context within which to execute an intervention.

Since theories cannot account for the variety of variables in a learning situation, exploration is needed to fill the gaps. DBR researchers can draw from a number of disciplines and methodologies as they execute an intervention. The decision of which methodologies to use should be driven by the research context and goals.

Siko and Barbour (2016) used the DBR process to address a gap they found in research regarding the effectiveness of having students create their own PowerPoint games to review for a test. In analyzing existing research, they found studies that stated teaching students to create their own PowerPoint games did not improve content retention. Siko and Barbour wanted to “determine if changes to the implementation protocol would lead to improved performance” (Siko & Barbour, 2016, p. 420). They chose to test their theory in three different phases and adapt the curriculum following each phase.

Informed by the analysis and exploration, researchers design and construct interventions, which may be a specific technology or “less concrete aspects such as activity structures, institutions, scaffolds, and curricula” (Design-Based Research Collective, 2003, pp. 5–6). This process involves laying out a variety of options for a solution and then creating the idea with the most promise.

Within Siko and Barbour’s design, they planned to observe three phases of a control group and a test group. Each phase would use t-tests to compare two unit tests for each group. They worked with teachers to implement time for playing PowerPoint games as well as a discussion on what makes games successful. The first implementation was a control phase that replicated past research and established a baseline. Once they finished that phase, they began to evaluate.

Researchers can evaluate their designs both before and after use. The cyclical process involves careful, constant evaluation for each iteration so that improvements can be made. While tests and quizzes are a standard way of evaluating educational progress, interviews and observations also play a key role, as they allow for better understanding of how teachers and students might see the learning situation.

Reflection allows the researcher to make connections between actions and results. Researchers must take the time to analyze what changes allowed them to have success or failure so that theory and practice at large can be benefited. Collins (1990) states:

It is important to analyze the reasons for failure and to take steps to fix them. It is critical to document the nature of the failures and the attempted revisions, as well as the overall results of the experiment, because this information informs the path to success. (pg. 5)

As researchers reflect on each change they made, they find what is most useful to the field at large, whether it be a failure or a success.

After evaluating results of the first phase, Siko and Barbour revisited the literature of instructional games. Based on that research, they first tried extending the length of time students spent creating the games. They also discovered that the students struggled to design effective test questions, so the researchers tried working with teachers to spend more time explaining how to ask good questions. As they explored these options, researchers were able to see unit test scores improve.

Reflection on how the study was conducted allowed the researchers to properly place their experiences within the context of existing research. They recognized that while they found positive impacts as a result of their intervention, there were a number of limitations with the study. This is an important realization for the research and allows readers to not misinterpret the scope of the findings.

This chapter has provided a brief overview of the origin, paradigms, outcomes, and processes of Design-Based Research (DBR). We explained that (a) DBR originated because some researchers believed that traditional research methods failed to improve classroom practices, (b) DBR places researchers as agents of change and research subjects as collaborators, (c) DBR produces both new designs and theories, and (d) DBR consists of an iterative process of design and evaluation to develop knowledge.

Collins, A. (1990). Toward a design science of education (Report No. 1). Washington, DC: Center for Technology in Education.