This was originally posted to Martin Weller's blog [https://edtechbooks.org/-eyC] on September 5, 2018.

Now that I have completed the 25 Years of Ed Tech [https://edtechbooks.org/-hDS] series (which was actually 26 years, because maths), I thought I’d have an attempt at some synthesis of it and try to extract some themes. In truth, each of these probably merits a post of its own, but I wanted to wrap this series up before the 25 Year anniversary of ALT-C next week [https://edtechbooks.org/-qwP]. Plus, tired.

No country for rapidity – one of the complaints, particularly from outsiders is that higher ed is resistant, and slow, to change. This is true, but we should also frame it as a strength. Universities have been around longer than Google after all, and part of their appeal is their immutability. This means they don’t abandon everything for the latest technology (see later for what tech tends to get adopted). If you’re planning on being around for another 1000 years then you need to be cautious. We didn’t close all our libraries and replace them with LaserDiscs in the 90s. As the conclusion of the Educause piece I wrote stated “it’s no game for the impatient”.

Historical amnesia – I’ve covered this before, but one of the characteristics of ed tech is that people wander into it from other disciplines. Often they wouldn’t even know they’re now in ed tech, they’re doing MOOCs, or messing about with assessment on their psychology course, and they may spend a bit of time doing it and return to their main focus. Ed Tech can be like a holiday resort, people passing through from many destinations, with only a few regulars remaining. What this means is there is a tendency we see repeatedly over the 25 years for ideas to be rediscovered. A consequence of this is that it sees every development as operating in isolation instead of building on the theoretical, financial, administrative and research of previous work. For example, you probably don’t get OER without open source, and you don’t get MOOCs without OER, and so on.

Cycles of interest – there are some ideas that keep recurring in ed tech: the intelligent tutor, personalised learning, the end of universities. Audrey Watters refers to zombie ideas [https://edtechbooks.org/-ZDQ], which just won’t die. Partly this is a result of the aforementioned historical amnesia, and partly it is a result of techno-optimism (“This time it really will work”). It is also a consequence of over enthusiastic initial claims, which the technology takes 10 years or so to catch up with. So while, intelligent tutoring systems were woefully inadequate for the claims in the 90s, some of that is justifiable in 2018. Also, just conceptually you sometimes need a few cycles at an idea to get it accepted.

Disruption isn’t for education – given it’s dominance in much of ed tech discourse, what the previous trends highlight is that disruption is simply not a very good theory to apply to the education sector. One of the main attractions of higher ed is its longevity, and disruption theory seeks to destroy a sector. Given that it has failed to do this to higher ed, despite numerous claims that this is the death of universities, would suggest that it won’t happen soon. Disruption also plays strongly to the benefits of historical amnesia, which is a weakness here, and the cycles of interest argue that what you want to do is build iteratively, rather than sweep away and start anew. There are lots of other reasons to distrust the idea of disruption, but in higher ed at least, it’s just not a very productive way to innovate.

The role of humans – ed tech seems to come in two guises: helping the educator or replacing them. If we look at developments such as wikis, OER, CMC, blogs, even SecondLife, then their primary aim is to find tech that can help enhance education, either for a new set of learners, to realise new approaches, or sometimes, just try some stuff out. Other approaches are framed in terms of removing human educators: AI, learning analytics, MOOCs. Not necessarily – for example, learning analytics can be used to help human educators better support learners. But often the hype (and financial interest) is around the large scale implementation of automatic learning. As I mentioned in a previous post [https://edtechbooks.org/-vhE] education is fundamentally a human enterprise, and my sense is we (at least those of us in ed tech in higher ed) should prioritise the former types of ed tech.

Innovation happens – for all the above: change happens slowly, people forget the past, disruption is a bust, focus on people – the survey of the last 25 years in ed tech also reveals a rich history of innovation. Web 2.0, bulletin board systems, PLEs, connectivism – these all saw exciting innovation and also questioning what education is for and how best to realise it.

Distance from the core – the technologies that get adopted and embedded into higher ed tend to correlate closely with core university functions, which we categorised as content, delivery and recognition in our recent OOFAT report [https://edtechbooks.org/-BfE]. So, VLEs, eportfolios, elearning – these kinds of technology relate very closely to these core functions. The further you get from these then the more difficult it becomes to make the technology relevant, and embedded in everyday practice.

So, that’s really the end of the series. 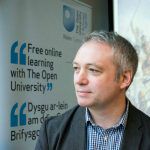 Dr. Weller is Professor of Educational Technology at the Open University. His interests are in Digital Scholarship, open education and impact of new technologies. He has written some books, including The Digital Scholar and Battle for Open which are available under an open access licence. Other publications can be found here. He is also co-editor of the open access journal, JIME.

He is Director of the OER Research Hub, and the ICDE Chair in OER. He regularly provide workshops and keynote talks on the use of social media by academics, open education, and online learning. He blogs at http://blog.edtechie.net/about/.