This was originally posted to Tressie McMilan Cottom's blog [https://edtechbooks.org/-eHj] on July 23, 2017.

Coding bootcamps are the new MOOCs which were the new correspondence school which was the old video on-demand schools.

Two of the largest bootcamp brands closed last week within days of each other. Dev Camp maybe had the biggest brand but Iron Yard operated in more areas. Both are now gone. You can read more about the closings and their ownership history/structure from Audrey Watters.  [https://edtechbooks.org/-iLv]

I got lots of inquiries about the closures. Audrey does a great job of laying out the landscape. I would put a finer point on some of the political economy:

Boot camps are a tax paid by suitably credentialed workers who do not have enough capital (economic, social, or cultural) to enter a high status field of work in which some job is undergoing an actual or projected short-term demand bubble.

Lower Ed did not refer to a set of schools but to a sociological process of credentialism. Bootcamps are part of the Lower Ed ecosystem: 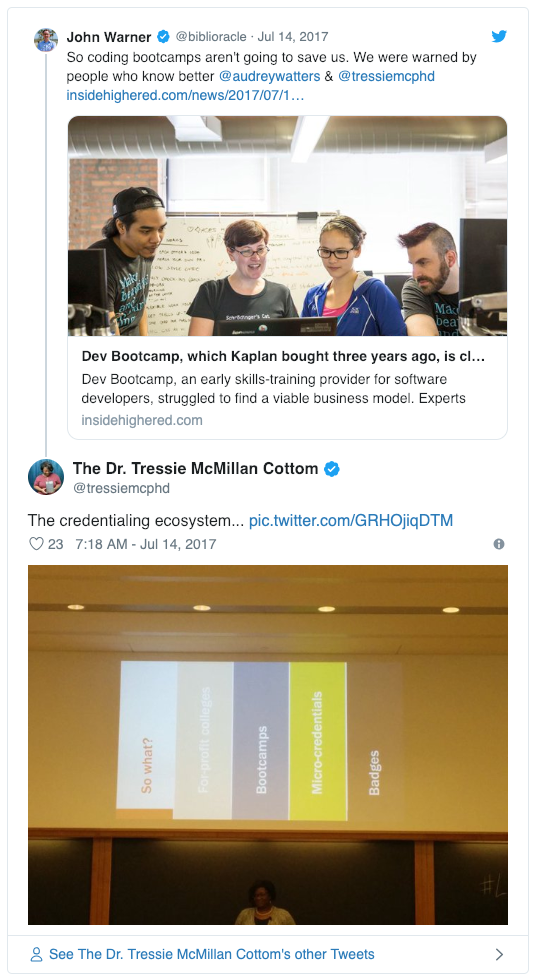 I gave a talk at Berkman [https://edtechbooks.org/-XaL]recently. That’s where that image of my slideshow is from. I organize Lower Ed as the processes responding to a problem. The problem is the shift of job training risk from states and firms to individuals. Boot camps were supposed to, as Jeff Selingo responded to me on Twitter, disrupt graduate school and not college generally. The idea was that boot camp participants already have the training and capital necessary to access white collar work. Boot camps would merely train them in a specific job task. These were taken at individual cost, in money and time. Without a guaranteed job or salary while training, this constitutes a pre-tax paid for job entry. Of course, this only works, as I go on to say on Twitter, if 1) you don’t need the boot camp certificate as a signal 2) wages are sufficiently high to offset individual costs and 3) the boot camp credential functions for both labor market entry AND promotion. We have no independent evidence that any of these things are true. For the problem that produced the market demand and the risk structure of participating in them, boot camps are a type of lower ed.

People don’t like that. Lots of people who I like do not like that assessment. I would remind non-sociologists of a few things. One, there are always exceptions to a rule. Two, exceptions are part of how we systematically arrive at the rule. And, three, individual success stories are not the point. The structure of the stories is the point. Just like black women get mad at me because they love their Capella degree, boot camp faithful often get angry at this assessment. I cannot help that but I can tell you that there is a version of the future where you don’t have to be happy about paying for job training without a promise of a job or a career.

There is a wild wild west of credentialing, produced by the characteristics of the new economy. We will have another bootcamp, just like we had another MOOC. Until the social problem is solved or the political conditions that make the market the only solution to that problem change, we will keep writing this story. The right research agenda right now is to map the credential ecosystem, detail the context of different Lower Ed credentials by groups impacted, occupations that are undergoing change, and risk shifted.