Open Pedagogy and a Very Brief History of the Concept

This was originally posted to Tannis Morgan's blog [https://edtechbooks.org/-vpo] on December 21, 2016.

The good folks at #OER17 [https://edtechbooks.org/-pqr] have accepted my conference proposal on our University of Guadalajara faculty development program [http://udg.theagoraonline.net], which I positioned in the proposal as an example of an open pedagogy approach to faculty development.  However the proposal acceptance is contingent on one thing:  it was noted that I don’t define or link to any scholarly resources on open pedagogy, a very fair point and very useful feedback. And a bit sloppy on my part, if I’m quite honest.

This lead me down a rabbit hole this week, digging around for scholarly work on open pedagogy.  The big surprise – although probably not to Vivian Rolfe who did a masterful job of a presentation at OpenEd16 [https://edtechbooks.org/-fii] this year digging into some history of open [https://edtechbooks.org/-mpB]  – is that the term open pedagogy dates back to the early 1970s, where it was actually quite a thing in Quebec and France.  But does it mean what we think it means?

One of the oldest references comes from Canada’s own Claude Paquette, who in this article from 1979 [https://edtechbooks.org/-BSt] states that open pedagogy has already been in place for almost 10 years, and lays out some foundational principles in his paper as well as this one from 2005 [https://edtechbooks.org/-HZN].  His 1995 paper talks about open pedagogy with a historical distance that can only be appreciated if you’ve embraced a novel idea and watched it succeed and fail simultaneously. Consider this passage for example:

The necessary rupture with textbook pedagogy charmed the  most progressive and most innovative of us, while those for pedagogical renewal were only looking for new techniques to liven things up without questioning the foundation and practices.    (my translation)

Paquette outlines 3 sets of foundational values of open pedagogy, namely:  autonomy and interdependence; freedom and responsibility; democracy and participation.  He goes into some detail about these, but us ed tech folks will recognize some of the themes – individualized learning, learner choice, self-direction, – to name a few.  He even talks about “open activities” as the big innovation in open pedagogy, whereby students simultaneously use  their multiple talents in learning situations, and this process of learning is “interactional” (aka social and connected).  For Paquette, open is very much about learner choice, (albeit for him this is really about creating a classroom environment where this can be optimized).  Good stuff right?

Of course, this becomes much more fascinating if you consider the sociopolitical context in which these ideas were playing out.  Quebec had just experienced a cultural revolution [https://edtechbooks.org/-CJp] which lead to a rupture of the stronghold of the Catholic church on pretty much all of Quebec society, and from which emerged, among other things, an educational reform and establishment of a CEGEP system in Quebec [https://edtechbooks.org/-vpr] (tuition free post secondary colleges).  This is significant in that prior to this rupture, post secondary  education was largely accessible only to the (English) elite, and public education pretty much ended at age 14.

Meanwhile in Europe, there were similar educational reform ambitions [https://edtechbooks.org/-qgA] and the language education world had embraced ideas of autonomy and self-direction in reaction to a number of sociocultural currents, which are nicely wrapped up for us in this 1995 article by Gremmo and Riley [https://edtechbooks.org/-ccAZ].  There are quite a few gems to consider in here in the context of how we talk about open and open pedagogy currently.  For example, the abstract starts us off with a bang in situating autonomy and self direction against a backdrop of:

Another gem discusses the role of technology in facilitating autonomy:

(4) Developments in technology have made an undeniable contribution to the spread of autonomy and self-success. The tape-recorder, the fast-copier, TV and the video-recorder, the computer, the photocopier, magazines, newspapers, fax and e-mail, all provide a rich variety of tools and techniques for the implementation of self-directed learning. In institutional terms, the facilities have been gathered together to form the resource centres (mediatheques, sound libraries, etc.) which will be discussed below. However, experience shows that the price of autonomy is eternal vigilance: there is a strong and repeated tendency for the introduction of some new technology by enthusiastic “technicians” to be accompanied by a retrograde and unreflecting pedagogy. A grammar drill on a computer is still a grammar drill and if learners are given little choice (or no training, which comes to the same thing) then it is a travesty to call their programmes “self-directed”. (p. 153)

So how does this compare to the foundational principles on which the current open pedagogy movement rests?  At the moment, the current strand of open pedagogy seems to be defined by its use and creation of open materials. Consider for example this description from the OE consortium [https://edtechbooks.org/-hRhD].

Or this poster for an event at CUNY. 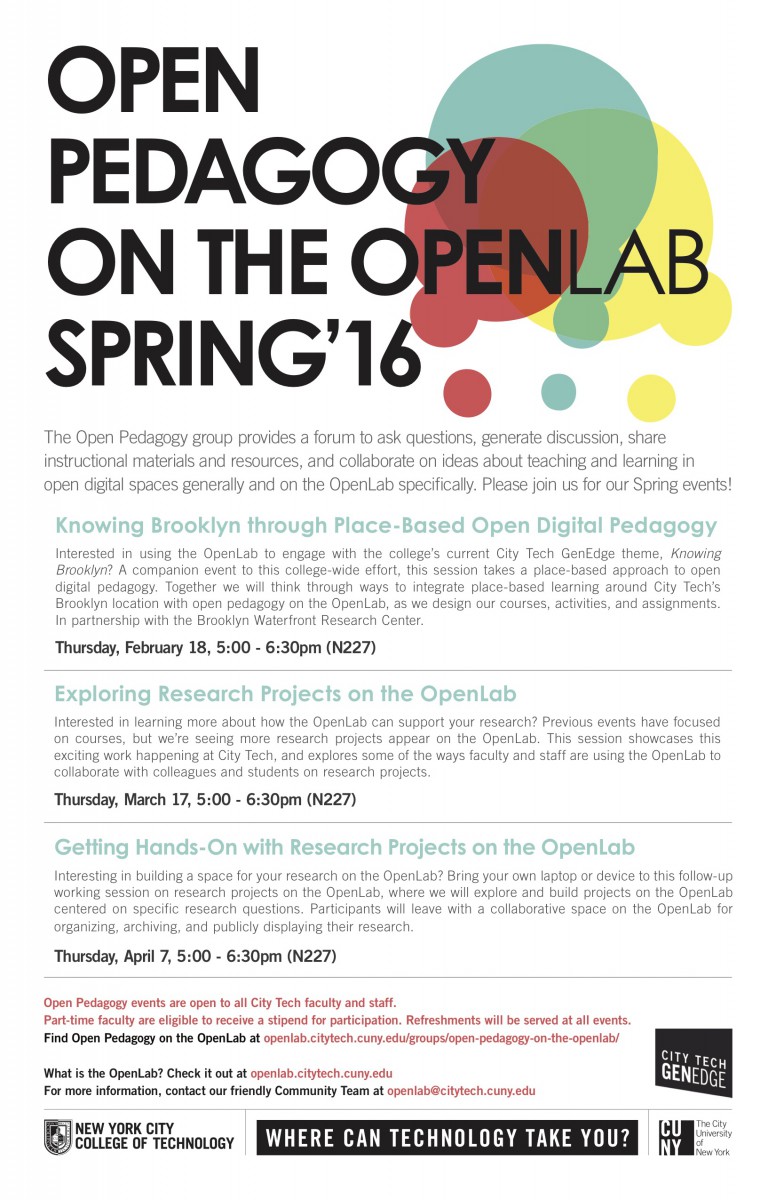 Or this blog post from David Wiley, [https://edtechbooks.org/-Frx] where he discusses the disposable assignment.

In other words, open pedagogy is currently a sort of proxy for the use and creation of open educational resources as opposed to being tied to a broader pedagogical objective.  Of course, this isn’t to say that the OER movement lacks foundational values and broader objectives – if anything, so much of the 1970s open pedagogy and autonomy world seems to resonate.   In fact, I find it quite fascinating that the authors of this post on the 8 qualities of open pedagogy [https://edtechbooks.org/-sob] seem to arrive at a similar place as our 1970s counterparts.  But it does raise the question as to whether we are being ambitious enough in our articulations and aspirations for open pedagogy.  And to Vivian Rolfe’s point made at OpenEd 16, are we are paying enough attention to voices of the past?