This was originally posted to Rob Farrow's blog [https://edtechbooks.org/-GWC] on November 28, 2015.

I’ve started writing this post at the Open Education 2015 [http://openeducation2015.org/] conference at the Fairmont Hotel in Vancouver because I want to try and capture some thoughts about the evolution of this movement and community.  But I’m finishing it from home after a little bit of time to digest and also after attending OpenUpTRU [https://edtechbooks.org/-ygI] in Kamloops earlier in the week.

This has been my fifth consecutive Open Education conference and I’ve been privileged enough to hear from a lot of different people from around the world about their use of OER and the impact it has for them.  Over these years there has been a steady move towards raising the game with research into impact and strategising ways to mainstream the adoption of OER; perhaps the clearest example of this is the may presentations that have been devoted to open textbook adoption and efficacy studies at this conference.  This is entirely understandable given the co-ordinated focus in the USA on open textbook adoption as a tangible and measurable goal for advocacy and research.

Great things have been achieved by researchers working with the Open Education Group [http://openedgroup.org/] in this regard.  In terms of controlled studies which attempt to isolate the effects of moving to an open textbook while controlling for other variables (like instructors, etc.) there really isn’t any other game in town that comes close.  And there is a real need for this kind of work [https://edtechbooks.org/-tXn], since it is creating the body of evidence that can be used to reject the claim that open resources are of inferior quality.  The endgame here is to support widespread adoption of open textbooks in colleges.  This is something that can be measured and the savings calculated, so it’s a great strategic choice for advocates in the USA.

Now we have established that this research is great, I feel there are a couple of points to raise.  Firstly, a methodological issue related to the tension between two virtues of open textbooks that we like to put forward:  that they are ‘efficacious’ (they ’cause’ learning) [1] as established by controlled studies; and that they can be freely adapted.  How much adaptation can a text withstand before the efficacy studies – which are based on carefully controlling variables – must be repeated?  Of course, in many cases the textbooks are just adopted wholesale.  They are mapped onto common curricula and so can be used to teach a whole programme.  But if someone decides not to tamper with the textbook, isn’t the net result of all this just that the commercial textbook has been replaced by an open textbook?  But if they do ‘tamper’ with the textbook, might they be in danger of making their textbooks less ‘efficacious’?

Maybe that depends on how good they are at teaching.  What I mean by this is that, aside from all the fantastic savings made by students, the course may be taught in exactly the same way as before.  In effect, the open textbook strategy might (when fully realised) leave us with more or less the same educational systems as before (although a lot more affordable for many, and this would undoubtedly be a fine thing).

In effect, this is an attempt to ‘colonise’ an existing system by taking it over from within.  Maybe something more radical follows from this – open textbooks are a great way to introduce students and faculty to OER, and who knows what might happen a few years down the line in a situation where everyone knows about open?

For now, though, nothing much need change except using an open textbook. Except it’s not just an open textbook, because to scale up and keep making the case for efficacy the data gathered must grow, which means more metrics, open learning analytics, and possible homogenization of the learning process.

This was how I captured the thought at the time:

What was less obvious at the conference this year were the voices coming from a different part of the OER movement: the people who emphasize the radical potential of OER.

Because they’re a disparate bunch it’s hard to put a label on this group, even though by the title of this piece I’m referring to them as ‘edupunks (&c.)’.  The important thing is that they are more radical in ambition, and in that sense they occupy the opposite end of the spectrum from the ‘colonisers’.

Here are some illustrative comments shared on Twitter at the time. 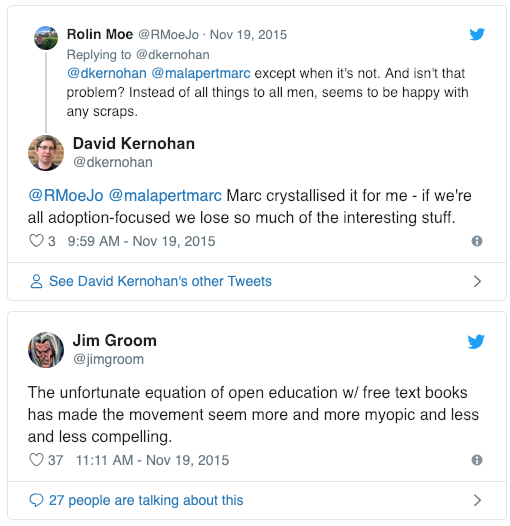 Just going to say it, in a spirit of love and optimism: “open textbook” is an oxymoron. #OpenEd15 [https://edtechbooks.org/-GWY]

There were plenty of others to choose from, as well as plenty of support for what is being achieved with open textbooks.  Robin actually went a step further and wrote a blog post [https://edtechbooks.org/-HFz] which expressed her frustration with the dominance of open textbooks and outlined the kinds of things that she wants from a conference like Open Education.

So, should the open education movement seek to colonise education, or transform it?  In can be tempting to think that the difference here is really between evolution and revolution.  The colonisers want to evolve formal education in a helpful way while the ‘edupunks (&c.)’ are more interested in empowerment and the freedoms provided by open licensing.

We might also surmise that this is a false dichotomy. Most people are somewhere in the middle, and relatively few people go around calling themselves ‘edupunks’.  In some ways this can be seen as the return of the familiar gratis (‘colonisers’) vs libre (‘edupunk (&c.)’) distinction that has been with the OER movement since the very early days: is the OER movement about freedom, or about things being ‘free’?

C. P. Snow famously wrote about the divergence of science and the humanities in the influential The Two Cultures and the Scientific Revolution [https://edtechbooks.org/-HbQ].  Snow foresaw that the aspirations, language and standards of validity of academic cultures were moving apart in ways that prevented cross-pollination of ideas and findings.  Thus, we have science professors who have never read Shakespeare, literature professors who cannot explain the laws of thermodynamics, and so on.  Now arguably there are more interdisciplinary thinkers than there used to be but education does still tend to siphon learners off into one or the other camp.

Without getting too far into that debate, I think we can use the basic idea of ‘Two Cultures’ as a way of thinking about changes in the OER movement, and being aware of people pulling in different directions.  Everyone is still part of the same conversation at the moment, but it doesn’t feel like it would take much to see new, more niche conferences and journals springing up.  In my view, both of these cultures need each other, because each ameliorates the vulnerabilities of the other and encourages attentiveness to the bigger picture.  So keep talking!

[1] I’m a little uncomfortable personally with the language of efficacy, which risks being scientistic [https://edtechbooks.org/-IQG] – I’m not sure that isolating a lot of variables and then attributing any difference to the intervention is reliable in education research per se – though it is certainly commonplace and there is of course a need for evidence.